In the early days of 2013, I put out a post that outlined several of my blogging and collecting goals.  You can read that again here.

I just want to quickly run through my goals and see how I did this year.

1) Downsizing - Failure, but headed in the right direction.  I added a lot more cards than I subtracted, but I did manage to get a ton of organizing a de-duping done.  I'm poised to give away a bunch of stuff in 2014 and hopefully reduce the closet footprint of my collection. Grade: C-

2) Baseball Player collections:
Not only did I meet my goals for every player, I met my overall goal and added autos of David and Justin.  Grade: A+

3) VT Hokie Football collections:
I would have given myself an A just based on the Randall increase and meeting my card/player goal.  The gold refractor 1/1 for Randall, though, made this year spectacular. Grade: A+

4) Blog:
If not for struggling with posts in Sept-Nov, I would have had my most prolific year of posting.  Still, it was a successful year, and I accomplished most of what I wanted to do. Grade: A-

I'd say I had another pretty good year. 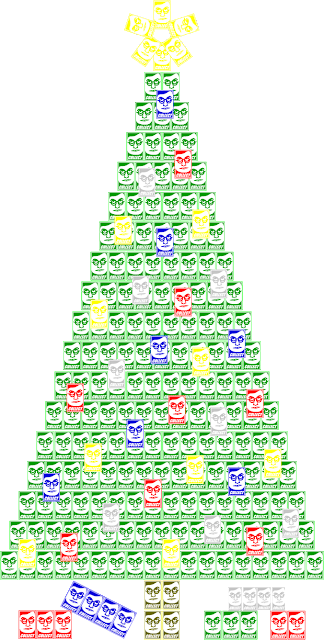 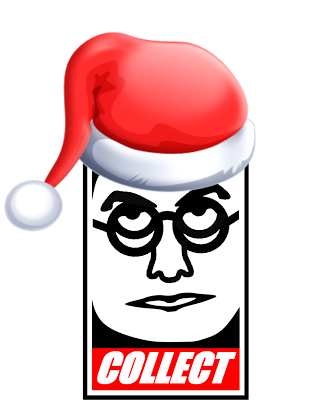 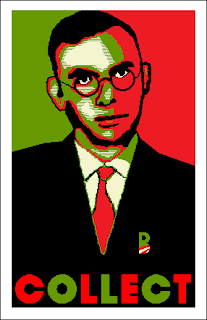 Sometimes you just buy stuff on a whim.  I happened to stop by the LCS (http://www.jerseysccg.com/) on the day Strata came out.  The box price was pretty reasonable and the guy said he had just opened the case.  I decided to treat myself to a box (18 packs, 6 cards), being that it was the first from the case.

I got one numbered parallel,

Ertz is having a pretty good season, especially with Foles at the helm.

I got two rookie die cuts.  At one-per-box, I beat the odds.

This is turning into an Eagles-fest.

The box promises three hits, and I got three.  No complaints, here.

The first is a jersey card.  I did a little better than average and got a gold patch parallel:

My second hit was an autograph redemption:

I'll probably redeem it, hope he doesn't sign, and try to ask for a former-Hokie replacement.

My last hit comes one-per-case, so I'd say I did pretty well with my box.

It's not one of the top rookies, but Jones still has a decent following.  Apparently my Eagles box turned into a PA box.  The scan definitely doesn't do justice to the card.

I took advantage of having Strata earlier than a lot of folks and listed the good stuff on eBay.  The Ertz, Wheaton Patch, and Jones Auto/Relic all sold, which helped me recoup most of what I spent.  I'm always happy when I bust a box, get to keep a bunch of cards and still make back some money.  I would recommend Strata if you're looking to bust a hobby box at a reasonable price.  There are a lot of nice looking cards in there.

Merry Christmas to me!

My father-in-law has often bought me boxes for birthdays and Christmas, several of which I've posted on here.

It works out well, as I have an Amazon wish list, and he checks that to see what boxes I want.

It's hard to resist boxes with Griffey on them.  I'll keep this short (just the hits) and won't bore you with base cards from 7 years ago.

Crime Dog was in the very first pack, and I was pleasantly surprised to see him.  You don't come across many Fred McGriff cards these days.

On the Twelfth Day of Cardmas, My Mistress Gave to Me...

We've all done it...bought that thing for no reason.  There's no hope here.  None at all.

This time, I did it twice.  That's right, I bought two of these.  They were discounted, but still...why?

Having two of these means we can have box battle, though...which may be the only way to get some value out of these.  10 packs plus two shady mcshaderton jersey/card sets.  That's 12 items.  Appropriate.

I put the packs in year order for each box.  We'll compare the best cards from corresponding packs to see which box wins.

Here are the packs: 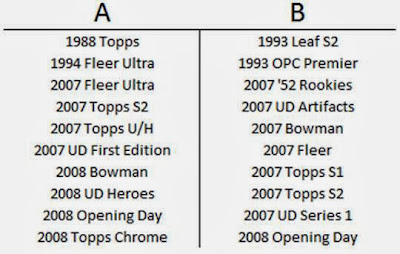 Of course, each box also has 2 jersey/card sets that will also be compared.

As much as I like the RB cards, I gotta give the edge to Griffey.  It was the Mariners uni that wins it for me.

Nice, a gold parallel and a chrome parallel.  I gotta go with the chrome.  Sorry, Carp. Box B retakes the lead.

While I needed Mauer for my Artifacts set, I also needed the Zimmerman.  PC rules over set building, for me.  Tie ballgame once again.

Not many people have hit their 737th home run.  My vote goes to the best player to ever play the game.  3-2.

Things are not good when a Brad Lidge base card is the best card in the pack.  Cobb by an ear...of corn...aka cob...because I'm hilarious.

So the next pack for Box B gives a Rockies team card.  While I do value it above Brad Lidge, I definitely don't value it above Torre YSL. Just like that, it's 5-3.

Now it's time for the moment you've all been waiting for.  What legen-wait-for-it-dary jersey/card sets did I get?

2007 Topps Doug Mientkewicz with a gray swatch and 1993 Fleer Larry Walker with a gray swatch.  Larry wins easily, but the main reason I'll cite is that the swatch matches the card border.  Anything that makes '93 Fleer interesting is good in my book.  Despite Walker getting the win, these two were severely disappointing.

What in the holy hell is that?  That's like the fake-ass jersey set version of a 1/1 laundry tag.

The Frank Thomas is cool, but the Tejada is ridiculous.   The back of the cards says"  The enclosed piece of jersey was cut from an Authentic Jersey from the player pictured on the front.  This Authentic Jersey was obtained from a trading card manufacturer or the secondary market."  Well, that's helpful.  While the authenticity may be questionable, the Majestic label makes sense, at least.

Anyway, this made for quite an eventful finale to the 12 Days of Cardmas.  If you're interested in trading (pretty much everything in the 12 DoC series is for trade) let me know.  The Thomas is reserved for Jon from Community Gum if he wants it to go with the one I sent him a couple years ago.

On the Eleventh Day of Cardmas, My Mistress Gave to Me...


I somehow managed to amass 11 packs that had EJ Manuel on the cover.

I had 5 of the 2013 Elite packs and 6 of the 2013 Platinum packs, all hobby.  At least Geno was on 6 of them to make sure there were enough interceptions for everybody.

I wouldn't mind opening a box of Elite, but 2013 probably wouldn't be my choice.  The base card aren't very exciting.

The coolest card I pulled was this clear plastic Hard Hats insert numbered to 299:

The bottom corners on this thing are dangerous.

I did get a hit out of one of the Elite packs:

Rookies, not bad. They're pretty nice.

Then there's these ugly pieces of shit. What the hell.  Bad.

This was the only good card in the bunch.  It's a camo die cut.  The only problem is, JPP isn't rookie, nor are many of the players found in this set.  But, Topps decided to slap a RC logo on there anyway.  I guess it technically is JPP's first camo die cut card, but I'm not sure that's how the rules work.  Anyway, that's all for today.

On the Tenth Day of Cardmas, My Mistress Gave to Me...

A Mega Box with Topps Chrome!

C'mon, you're singing along, right?

Sometimes I end up with blasters for no reason.

Nobody really needs a 2009 Upper Deck Series 2 blaster with 10 packs.  Even at a discounted $12, it's a little steep.  However, sometimes you're just in that mood to open something.  It's sad when this is the best option.  Oh well.

I only have about 10 copies of this card, but it's still David Wright, so woohoo!

Starquest in varying levels of rarity. The last two are Gold Rare.

This one is Emerald supercalifragilistic Rare.

A picture of Bench kneeling with a caption that says "Bench rises..."  I love it.

My guaranteed hit.  Fellhauer is in AAA, so I guess it's something. It wasn't the best card in the box, though.  That honor would go to this guy:

This is a Goodwin Champions Preview.  I seem to have a knack for pulling nice Jordans out of non-basketball products.

At least the Jordan made me feel better about buying this thing.