Two down, two to go. 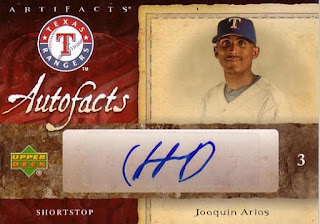 I'm showing the auto first, because it really doesn't hold up to the relics for this box.  At least Arias is still active.  In fact, he's batting .272 through 107 games for the Giants this year as a backup infielder. 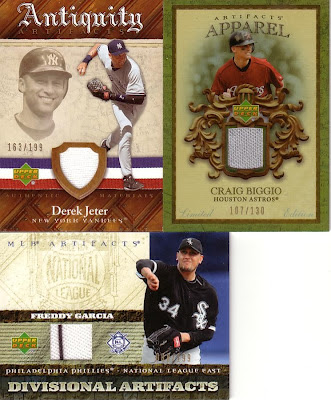 Woohoo! Freddy Garcia!...haha, I know.  I would like to note, though, before Jeff gets excited, that the Garcia is a PHILLIES card (note the team name on the card, and that it's an NL card).

The Jeter is pretty awesome.  I'm sure Kirk will be happy to have a nice Jeter relic.

Lastly, I have to say I am dissappointed with Artifacts.  After Sam trashed the product, I thought for sure these boxes would spurn him.  But no, Artifacts decided to grace Sam with a sweet, shiny, Limited Craig Biggio Artifacts Apparel Jersey #/130.

I feel like Jake Peavy would have at least two 20-win seasons if not for playing for the Padres for several years. 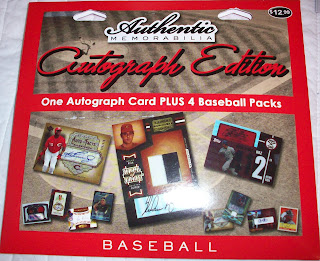 Do you think we'll pull that sick Griffey Auto-Facts or the crazy Ryan auto-patch on the front?

This is about what I expected from this.  Highlights from the packs:

That's bad when Orlando Hernandez, Aaron Miles, and Moises Alou are the highlights. 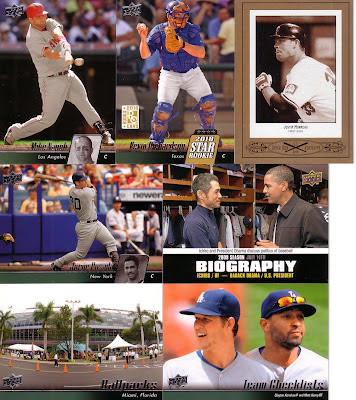 That's an improvement at least.  The Morneau and Ichiro inserts are nice.

The Dinger and the Bush are at least entertaining, I suppose. 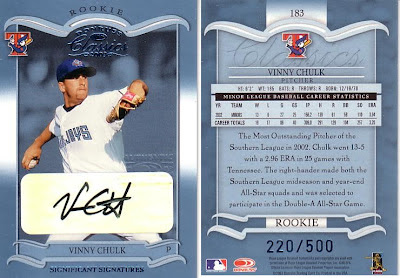 Ah, the elusive Vinny Chulk.  After a handful of years in the MLB and a couple in the minors, Chulk appeared briefly for the Brewers this year before getting sent back down. He's one of those guys that seems to do well in AAA but just can't hack it in the MLB.

AJ Green has been tearing it up this year.

I'm always happy to add a Hokie to my collection.  Tyrod is currently the backup for Joe Flacco.

Similar to the Todd McShay Scouting Report cards, they also have Chris Mortensen Retro Report cards that are pretty cool.

Kerley is the #3 receiver for the Jets.  He's undersized, but is actually a pretty solid receiver. He currently has 185 yards and 2 TDs this year.  The helmets are pretty cool, and his signature, especially in silver, looks pretty sweet on it.  I have a soft spot for TCU/Boise State guys because I always felt those two teams were underappreciated and underrated the last few years. I also think TCU and Boise State got screwed out of playing for a title in 2010 and 2006 respectively.  I think those two teams were capable of competing with anyone. 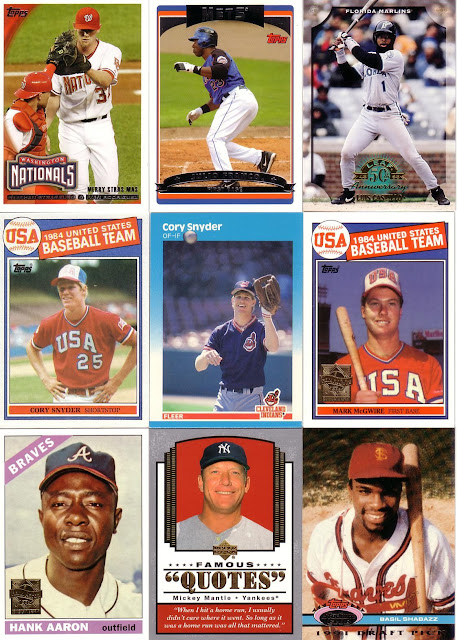 Merry Stras-Mas.  Very strange for a baseball card on many levels.  First, it's nowhere near Christmas.  Second, last time I checked, Strasburg is not Christ.

I love that 2006 Julio Franco.  He was 48 when the card came out.  It has 22 years of stats on the back.  I loved him as a kid.  I was on the Rangers in little league, so naturally I liked the real Rangers, especially Ruben Sierra and Julio Franco.  There was nothing better than playing backyard baseball and trying to emulate Franco's stance.

I scanned that Castillo card because it's funny to see a Marlins play in winter gear.

It's a shame that '85 Cory Snyder isn't an '85 McGwire. However, Snyder was a stud for that Olympic team.

Speaking of Cory Snyder, that's some weird positioning of the ball on that Fleer card.

"When I hit a home run, I usually didn't care where it went.  So long as it was a home run was all that mattered" -Mickey Mantle

The Basil Shabazz, aside from being an odd name, is an interesting card.  It's from the 1992 Stadium Club Dome set. The really strange thing, is that it appears painted, while the other cards from the set are just photos.  Interesting note, Basil Shabazz was a high school friend of Torii Hunter.  I came across this cool article.  Apparently Basil was a freakish athlete. 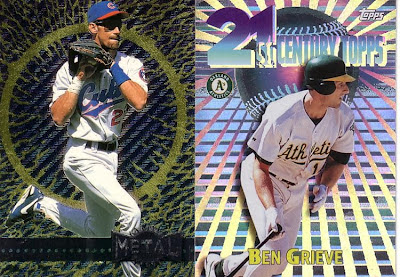 These cards were just too shiny to not scan.  The Grieve may look like it's just printed that way, but its actually an explosion of foil that scanned really well.

Aside from randomness, there were a few notable rookies and prospects: 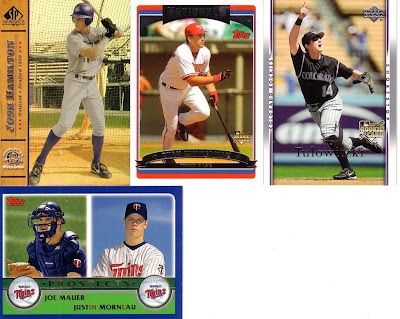 Hamilton looks lanky, but I love a good BP picture.  Zim and Tulo are two of the better rookies you can get from late 2000s products.  The Mauer/Morneau is just a cool card, especially since they still play together. 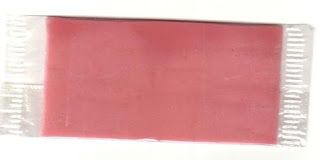 I haven't decided who gets the gum, yet.  It's going in a package, though.

This last card is the most appropriate card we've pulled in the group break. 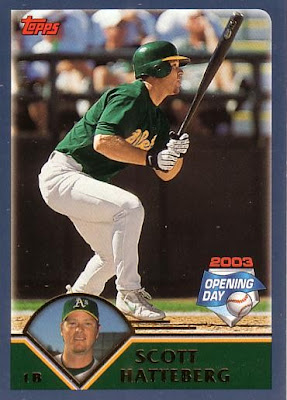 If you don't understand how this card is appropriate for a Moneyball-inspired break, then you need to go watch Moneyball.
Posted by Spankee at 9/28/2012 06:11:00 PM 2 comments:

I thought it would be cool if it was a big name player who received the one vote that kept Crosby from being unanimous AL ROY in 2004.  It was Shingo Takatsu.  There goes a good post.

I can't believe Zito is 13-8 this year.  I would have bet that he wouldn't see another winning season, especially not with double-digit wins.

Here is the second Artifacts box in the group break. Since I showed off one of my own boxes yesterday, I figured I should show a group break one today. 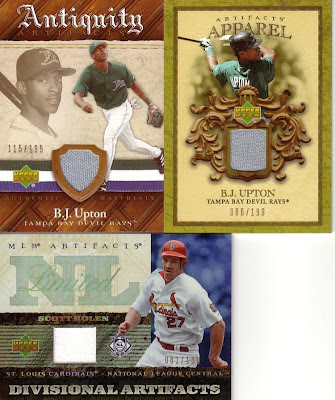 I know, I know.  Of all people to pick up this box for a group break...  That's not 1, but 2 BJ Upton relics.  Since Douglas Corti bought the Rays, I will hopefully be trading with him for these two BJs.

Madding pulls his second Cardinal relic in as many boxes.  This time it's a nice Rolen Limited #/130. The limited versions of the relics have a nice holo sheen (is that a thing?) to them. 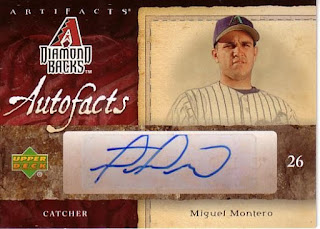 This card will be headed to Dawgbones, who did well in picking up the D-Backs.

Since I already showed my first 2006 Artifacts box, I might as well show my first 2007 box. 2007 is structred just like 2006, only one of the 3 relics may be from a past set, as we saw with the . I didn't realize that ahead of time, and I was a little confused when I got the first non-Artifacts relic.

A lot of times, the auto is the card you want to be the best hit in the box.

It's rare that the worst hit in a box is the auto.  Sometimes, though, that's not a bad thing.

Berkman is a solid relic to get.

This was a complete surprise.  It's actually from 2002 Upper Deck Yankee Dyansty Memorabilia.  It's not everyday you get a Chuck Knoblauch/Tim Raines dual jersey.  However, the last relic was the best:

Gomes had a heart attack when he was 22, despite being in great shape.  Holy crap.

Here are some more random cards I came across in the group break: 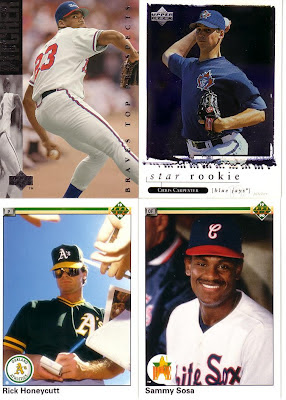 The name is hard to see on the upper left card, but it says Hiawatha Terrell Wade (though really, his first name is spelled Hawatha).  It's an interesting name, made even more interesting by not being spelled like the Iroquois leader of the similar name.

The star rookie up there is Christ Carpenter...which took me a while to decide it was in fact the Chris Carpenter of the Cardinals.  It's always cool to get prospect/rookie cards of guys who actually lasted in the league.

The Honeycutt is just cool because of the perspective and that he's signing autographs.  It makes me wonder what this scene would have looked like from afar with the photographer below everyone.

Of course, when talking rookie cards, is there any bigger rookie than Sammie So....hahaha.  Damn, I almost made it through that without laughing.  Congrats, Jeff, on your amazing Sosa RC. 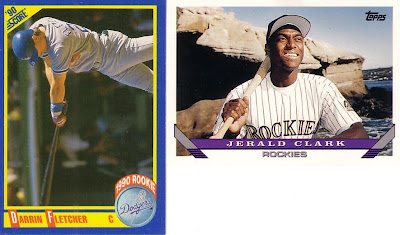 That '90 Score Fletcher may be the worst vertical card ever.

I really like the Clark card with the rocks in the background, even if Jerald is doing his best Vic Power/Benjamin Buford Blue impression. 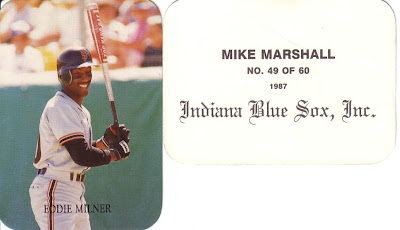 These wouldbe the definition of random. 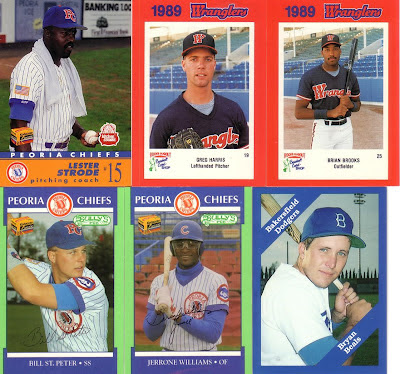 Of course, no random card collection would be complete without minor league cards, especially food and product issues (ex. Kodak/Sully's Pub).  The Wichita Wranglers cards are from "Rock's Dugout Baseball Card Shop", which is still open in Wichita, Kansas. 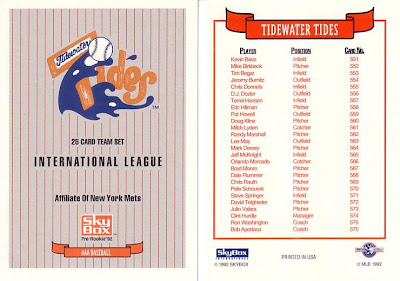 This card brought back memories from my childhood.  I actually went to some Tides games for this team.  Of course, for you, Jeromy Burnitz, Ron Washington, and Clint Hurdle may be the only familiar names.  I got Clint Hurdle's autograph on a ball that year, but I have no idea where that ball ended up...likely hit over a fence somewhere.  The two most notable names, for me, though, are Steve Springer and DJ Dozier.  Springer was supposed to be the real deal back in 1992.  He hit a homer in one of the games I went to, and since I was 7 at the time, he became a name I would never forget.  Dozier, on the other hand, was a poor man's Bo Jackson.  He excelled in baseball and football, reaching both the NFL and MLB, albeit for brief periods. 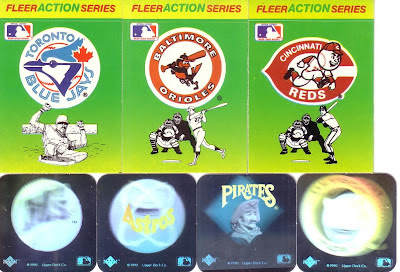 Every group break should have team stickers.  Who doesn't love stickers?  The hologram ones are especially awesome.  I'm glad they scanned well.

well, in my book, Matt will be a winner.  We recently traded.  I sent him some stuff.  He sent me some stuff.  Gotta love that.

Matt saw my 2010 Upper Deck box breaks and was obviously so amazed by my ability to pull Brian Bixler autos that he felt the need to send me some 2010 UD cards.  I'm trying to complete the set (see my want lists) and he helped in a big way.  He also sent a ton of 2010 UD inserts.  I scanned some of the base cards, including the two Ballparks he sent, that I absolutely love.

I saw Jason play for the Norfolk Tides when I was a kid.  He was about as nasty a AAA pitcher as there was.  12 Starts, 9-1, 1.55 ERA, with 3 shutouts. Later that year, he played for the Mets and went 9-2 with a 2.81 ERA.  After that monster start to his career, he struggled with consistency and injury before contributing as a reliever/closer for a couple of teams.  He's had a decent career, though, racking up 300 saves and a pair of All-Star appearances.

>>> I was more excited about the Justin Upton WIN card than the Theriot.  It's a very underwhelming hit to end on compared to the other two.