Well, my goal to get everything done before Thanksgiving didn't really work out.  But, things are wrapping up and I am starting to pack your cards.

First, I need to reveal who got the multiteam cards:


Now that we got that out of the way, here are the draft results for the non-team cards:

So, that brings us to the final team tally: 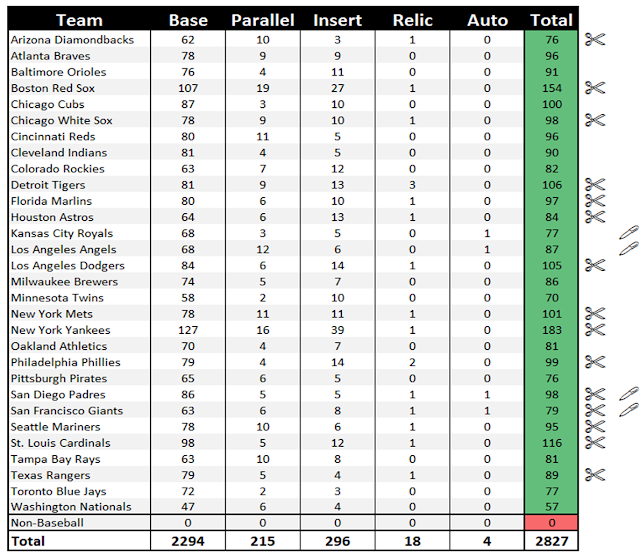 Now, don't despair, those that didn't get a hit.  Chances are, your package will have a hit in it from your team, or at least a few nice cards that I have added as a bonus.  Now, let's dig ridiculously deeper into the group break results: 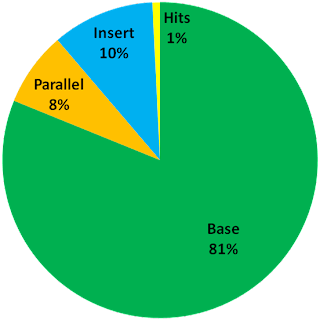 Essentially, if you assume a 10-card pack, we saw 8 base cards, 1 parallel, and 1insert per pack.  Hits came at roughly 1:10 packs, replacing the parallel.   Specifically, relics would come at a rate of 1:12 packs, whereas autos would fall at a rate of 1:55 packs.  I'd say those are reasonable numbers given that the majority of this stuff was retail.  The analysis breaks down a little given the fact that I am counting manu-patches as relics, but I think the trend is still pretty good.

The two most hated teams in the card world are the Yankees and the Red Sox because of their perceived preferential treatment.  Well, all evidence here suggest that they are, in fact, the two most overproduced teams.  Since there are 30 teams, an even distribution would say the Yanks/Sox would make up 6.67% of the cards.  In this break, the Yanks/Sox combo made up 12% of all cards, including 16% of the parallels and a whopping 22% of the inserts.  So, I would conclude that the hate is warranted.

As far as the MLB divisions go, the base card distribution is much closer to average, with each division getting 3-4% per team: 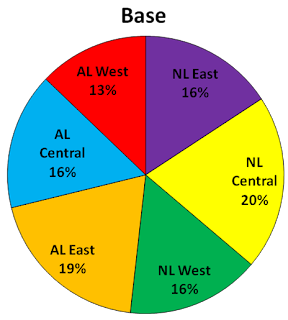 When you look at inserts and parallels, the AL bias comes into play: 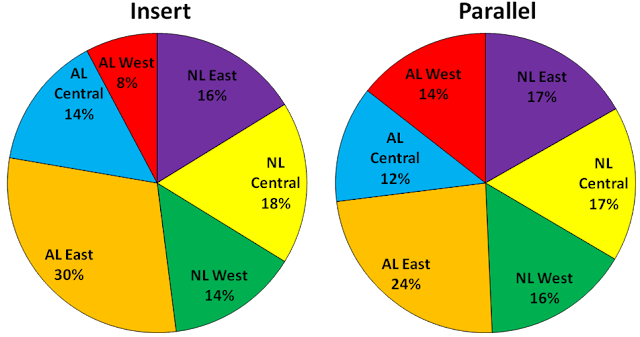 The NL (specifically the NL West) got their money back on the hits, though: 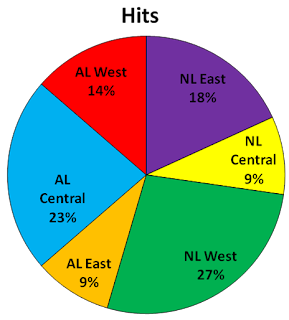 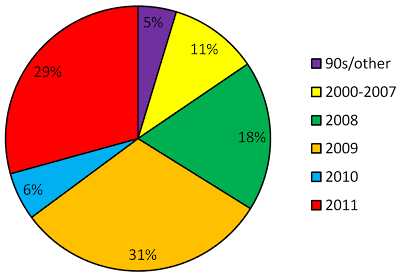 2008 and 2009 made up about half of all cards, likely due to the availability of discounted blasters.  More than a quarter of the cards came from 2011, which was more than I thought.  Hopefully that means a lot of you scored newer cards you wanted.

Since this break was inspired by Moneyball, I must make some mention of the price-ranking.  The Yankees and Red Sox were two of the top priced teams, and they didn't disappoint by racking up crazy stacks of inserts and parallels.  The Phillies, the #2 team, came through in the clutch with a couple of late relics for Dawgbones.  The Tigers did well with 3 relics, and the Cardinals were the third-highest card total.  They were both just above-average in price.  As for the lower end of the spectrum, the Diamondbacks and Astros over-acheived by pulling in relics of future HOFers Randy Johnson and Craig Biggio, respectively.

Now, to the awards portion of the show: 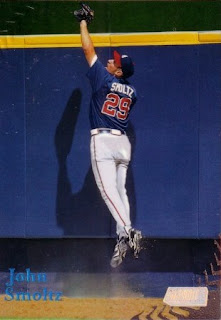 Best Parallel Card: 2011 Topps Update Babe Ruth Liquorfractor - This was pulled before the break officially started, but you can't beat the Babe on a Liquorfractor in a Red Sox jersey.

Best Relic: 2009 Topps Update Mickey Mantle Commemorative Patch - Sure it's out of fashion to pick a manu-patch here, but it's the best card, plain and simple.

MVP (Most Valuable Participant): Rod (Padrographs) - He killed this break.  He paid $9 for the Padres only to rack up nearly 100 cards, a Maddux relic, and the Gonzalez auto from above.

I will be packing up the cards this week and will hopefully have them out by early next week.  If you are feeling the holiday spirit, you could even wait until Christmas Day to open them.

Thanks for participating, hopefully you enjoy your cards once my slow ass gets them sent out!

New Cards from the Dimwit

Sam sent me some cards for our most recent trade, and man, are they sweet.  He loaded me up with a ton of 2008 UD X cards that I needed, including 5 Die Cut Golds, which are hard to come by these days. He sent a bunch of Xponentials, but I only scanned a couple.  He also sent other set needs.

Of course, he also hit my PCs with some Justin Uptons and some fresh Chromies:

He then topped it off with a pair of sweet Ryan Zimmerman relics.  Between this trade and his last group break, my Zim collection has really taken off.﻿

Some New Hokies for a Thursday Night Game

In honor of VT's game against UNC tonight, I want to show of some recent Hokie pickups.  The first two came from eBay:

Thanks to Ryan Williams' preseason injury,﻿ his cards are going relatively cheap.  This Topps Prime jumbo jersey is numbered to 318.

Next to Bryan Randall and Eddie Royal, Jeff King is probably my third-favorite Hokie of all-time.  He was a first down machine for us before moving on to the NFL.  I love on-card autos, epecially of Hokies in their VT attire.
The next two additions came courtesy of Dennis from Too Many Verlandersons...or whatever he is calling it these days.  I sent him an Austin Jackson Mini-Relic from Lineage, and he sent me these:
Xavier has a pretty nice auto, and I've been looking to pick one up for a while now.  My Hokie auto collection is looking pretty good now.  Thanks, Dennis!
Posted by Spankee at 11/17/2011 05:01:00 PM No comments:

After 2700+ cards, we were left with one relic and one auto that didn't go to teams:

I put them into my own coded randomizer (I'm sick of Random.org screenshots):

Here it is, folks. It's time to bust open the big Sweet Spot bonus.

I will be back soon with the plan for Randomizing/Drafting the non-team cards.

For now, here's the updated spreadsheet. Though not much has changed since we only added 6 cards, I'm sure rod will enjoy seeing the scissors and pen next to the Padres. 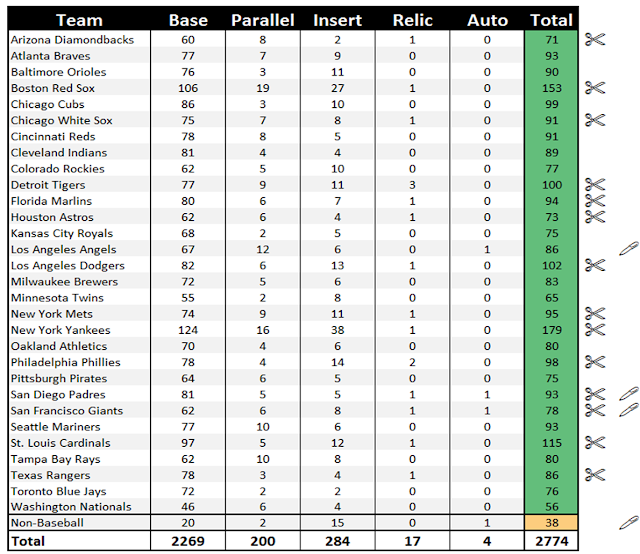 Picked up some good stuff for a little bonus action:

Going solely on book value, the Zobrist and DiMaggio are the two best cards in the box ($12 each) compared to the Dekker Jersey ($8).  In my opinion, that makes this a pretty darn good blaster.
﻿ 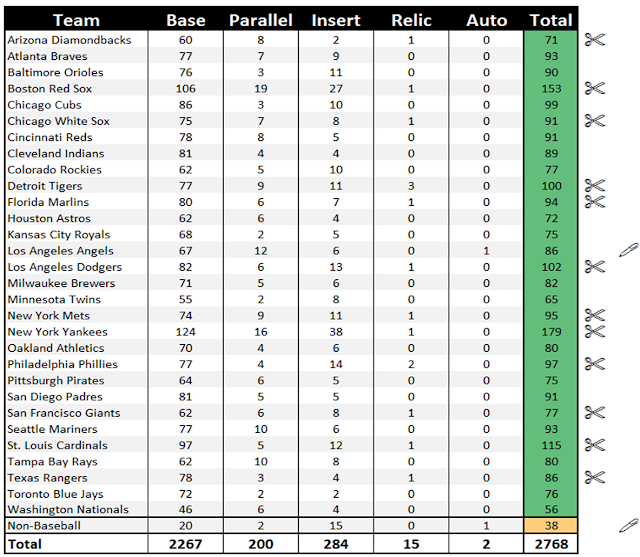 Time for a ton of random packs, all shown through crappy video with some accompanying scans.

Hopefully you made it all the way through that.  Here is the updated spreadsheet: 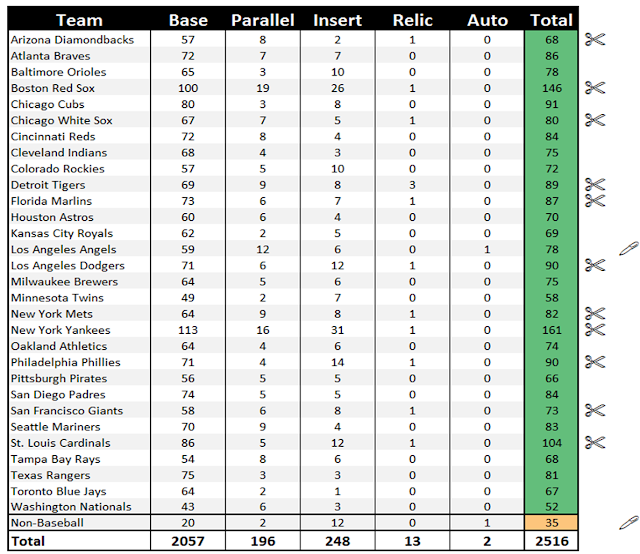 Ok, so we are in the home stretch.  I have all of the cards unpacked and sorted.  With the exception of this post, we'll mostly be finishing up with crappy videos.  You're welcome.  I'll hopefully have the rest of the cards posted in the next couple of days.  After that, I have to random the multi-team cards and non-team hits.  After that, I will be (likely) drafting out the remaining non-team cards.  Then, I can pack and ship.

Up now we have a big part of the break in 3 blasters of 2009 Topps Update.  These sat at the local K-Mart for a long time before I picked them up with a nice discount.  We'll be looking at roughly 240 cards, as well as three Commemorative Patches.

As usual, some base cards:

including several All-Stars and Homerun Derbyists.﻿

﻿
There were three keepers for me:

I'm really not sure how I never came across these three Wrights before.  It's rare that I am missing base Topps cards these days.
Of course, there was a ToppsTown card in each pack:

﻿The collation on these sucked.  There were a ton of dupes and a few trupes (?). Anyway, some of them were of the Gold persuasion:

There were two Gold Martins, but I didn't feel the need to add an extra row to the scanner.
Next up, the Turkey Reds:

followed by my favorite inserts, the Propaganda Posters:

Each box had one Legends of the Game (Updates) card:

Wade Boggs always looks so weird as a Devil Ray.
Now for the big draw: the Patches.  I will show these in the order of awesome.

It's a good sign when #3 is Bob Gibson.  The reason this is #3 is because the colors are hard to distinguish. This was the rare occasion where the scan is easier to read than in person.

﻿
The colors on this one, however, explode off the patch.  Very nice.  This would have been a good #1, but there's no denying the top dog:

The Mick and the Yanks win again.
The updated spreadsheet: 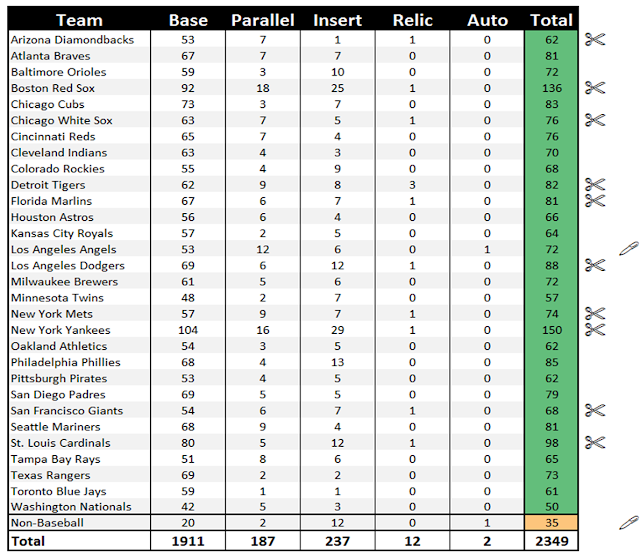