I had seen  a few retail boxes of 2007 Topps Football at Target recently, but they weren't worth the 30 bucks, so I ignored them.  I went back to target the other day and they had been marked down to 15, so I picked one up.  The box had 24 packs, 11 cards per pack. I wasn't expecting much, but was at least hoping to pick up an Adrian Peterson RC.  The packaging was not really exciting...

...but I don't care what the packaging looks like, I just like to rip it open.  Ladainian Tomlinson is on the pack front and has an insert collection specific to Target packs.  I got LT TD Tributes 14-19.  Most of the inserts I got weren't exciting, but I did get a copper LT, so that wasn't bad.  I ended up getting the base AP rookie, as well as the Rookie Fantasy Challenge card.  I'm happy to add these to my slim football collection.

I didn't get any hits, but I got a few Hokies to add to my collection

I was a freshman at VT when Kevin Jones ran for 1600 yds and 21 TD and Ernest Wilford was a beast, though underused.  I sat across from Wilford a couple times on the bus...he was freaking huge.  I really liked the Aaron Rouse RC since he's from the 757 (he went to First Colonial HS in Virginia Beach).  David Clowney was a great receiver with major speed, but unfortunately we had Sean Glennon at QB in Clowney's senior year.  Sean Glennon had the most ridiculous collection of WRs that year (Clowney, Eddie Royal, Justin Harper, Josh Morgan, and Josh Hyman) and he sucked miserably.  Four of those receivers are productive in the NFL right now, so how could Glennon have possibly been soooo bad.  Josh Hyman never made it pro, instead returning to be an assistant coach for my cousin, David Waddell, who is head coach at Deep Creek High School.  Deep Creek also produced DeAngelo Hall, Darryl Tapp and James Anderson. I still say Hyman was the second-best receiver in the bunch (behind Eddie Royal), but Glennon was too much of a pansy to throw across the middle.
Posted by Spankee at 7/31/2010 08:00:00 AM No comments:

I grabbed a pack of 2008 Upper Deck Series 1 the other day from the $1.59 box from Target because it was the only one in there.  I actually managed to get a hit in the pack, though it's of Travis Hafner, who seems to be the player I am most likely to pull memoribilia cards since I think I have 3-4 now.

I like when a jersey card makes sense (i.e. when the jersey color matches the jersey pictured), but I wasn't particularly interested in the card until I looked at the background picture.  I made out the player on the scoreboard to be Vince Coleman, and he's wearing a KC hat.  Vince played for the Royals in 1994 and 1995, so in this picture, the field is still Jacob's Field. I was surprised to figure out that the picture in the background was so old, since Hafner didn't even join the Tribe until 2003.  I became especially interested in the card when I noticed that the US Flag is at half-staff.  I couldn't figure out why this was the case and also what game this was, so maybe someone can help me.  Vince Coleman and the Royals played at Jacob's Field six times: 4/15/94, 4/16/94, 4/17/94, 5/8/95, 5/9/95, and 5/10/95.  Any clue why the flag would be at half-staff?
In addition to the Hafner jersey, I also got a David Wright Starquest that I didn't have, so I'll add it to my David Wright collection.

I broke down and decided to buy one more 2010 Topps Allen & Ginter rack pack from Wal-Mart the other day.  It turns out I made a pretty good choice.  I got two rookies

I was happy to finally get the Heyward rookie.  It also didn't hurt that I got the Ryan Zimmerman This Day in History Card.

I really like this TDIH card not only because it's of a Towny Townsend Guy, but because it's one of the few TDIH cards to have a close up of the player.  Too many of them have a full body shot of the players which amounts to a smaller picture than a mini.  That, and it kinda looks like he is staring down the newspaper guy.  I also really like that the event on the card is "The Siege of Yorktown Begins" because I live just a few minutes from Yorktown.  I was pretty happy already with getting a Heyward and  Zim TDIH, but was ecstatic when I pulled out the mini...

Yes, that's right, I pulled a Pujols Celestial Stars from a Wal-Mart rack pack.  That's probably the best individual pack pull I have had since my 2008 Stadium Club Evan Longoria Auto.  The horoscope on the back of the card suggests "Albert will experience a deep sense of satisfaction for [his] achievements in 2010."  Perhaps a World Series MVP in the future?
Posted by Spankee at 7/29/2010 09:21:00 PM No comments:

Getting the ball rolling

I'm slowly working on getting this blog going.  I've got a couple pages posted that I intend to finish in the next week or so.  The first is The Towny Townsend Guys who are the group of players that came from the area I grew up in.  Towny Townsend was responsible for AAU baseball in the Hampton Roads region of Virginia.  Towny coached my brother in little league and I was childhood friends with one of his kids.  The second page I'm working on is My Top 10, which is a list of my favorite cards along with the descriptions of why I like them.  They're not all rare cards like you might think, just cards I have a particular connection to.  In the future, I'd like to get a want list up there, as well as an unrealistic want list of cards I'll buy when I win the lottery.  I would also like to get a list of all the Relic, Auto, and Numbered Cards I have.
Posted by Spankee at 7/23/2010 09:54:00 PM No comments:

I love my wife

My wife was at Wal-Mart the other day and since I've managed to train her to check the card section, she stumbled on some 2010 Bowman Rack Packs.  She didn't know how many I would want of the six there, and I was in a meeting at work so I couldn't answer the phone.  She bought ALL 6! Wow, I love her so much.  Imagine if your wife surprised you by having your mistress waiting for you when you got home from work.  I guarantee it wouldn't work out too well if your mistress wasn't made of cardboard.  I slowly undressed my mistress to reveal a couple beauties.  The first pack I opened had a Starlin Castro Orange # 76/250 and an Alexander Colome Chrome Blue Refractor #125/250.  I'm a numbers guy, so I love when I get a numbered card with a pretty number like 125/250.  Nice to know I got the halfway-through-the-print-run card. The next few packs weren't as eventful as the first, but I did get an Eric Niesen Chrome Purple Refractor 397/999 and a Logan Forsythe auto.

I did like a couple of the gold cards I got.  First, the Erick Aybar card just plain made me hurt.  If that was me, my career would be over.  Next is Ichiro.  How is it that every Ichiro card is awesome?

Oh, and I refuse to use the name of the player that is the reason most people bought Bowman and A&G until I have one of his cards.  I saw him pitch in person at Nationals Park a few weeks ago.  The store in the park had some 2010 Bowman packs for $9 a pop.  Incredible.
Posted by Spankee at 7/23/2010 09:45:00 PM No comments:

I figured since all the hype right now is around 2010 Topps Allen & Ginter, I'd kick off my blog with a post of my A&G cards.  I enjoyed 2009 A&G, so I took a crack at 2010.  Earlier this year I had an interesting connection to A&G.  I was visiting Hollywood Cemetery in Richmond, VA as I have family buried there, and we decided to take a drive around.  It's quite a spectacular cemetery overlooking the James River, and it serves as the final resting place of two U.S. Presidents, Monroe and Tyler, the Confederate President, Jefferson Davis, and famous generals including George Pickett and J.E.B Stuart.  On the drive, I passed a small mausoleum that caught my eye - the name was "Ginter".  When I got home, I jumped on the internet and found out it actually was for the Lewis Ginter of A&G Tobacco fame.  I'll try to get a picture next time I'm out there.  Anyway, back to the cards...To date, I have purchased 2 blasters, 2 hobby packs, 1 rack pack, and a 3 retail packs.   Everyone has seen the A&G base cards by now, so I'll stick mostly to the minis. 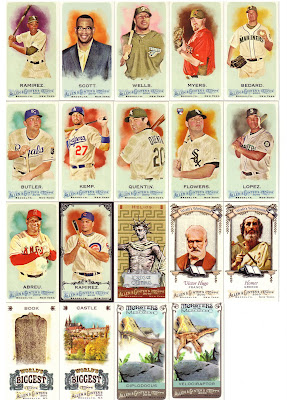 I also picked up a couple cards for my Towny Townsend collection,

I had one hit, which also happened to be my first ever bat relic, and I'll always take a hit of an MVP candidate...