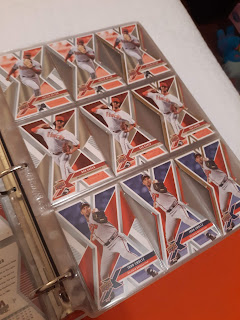 A little over 12 years ago, I bought my first house.  With that first came others.  It was also the first time since my re-entry into card collecting that all of my cards were in one place.  My money was usually budgeted for house stuff, so discounted blasters became a necessary "savings".  The discounted card products of 2008 happened to be the soup du jour, and I happened to be quite fond of all-you-can-eat soup.  The two lines that most became part of my purchase history were 2008 Upper Deck A Piece of History and 2008 Upper Deck X.  '08 APOH still remains my favorite non-Ginter set of all time.  Upper Deck X was merely a toss-in because the box looked cool.  The X base set is pretty terrible; clearly made for the sole purpose of facilitating die cut cards.  I'm okay with that, though, because the die cut cards are worth it.  Then, just to promote stress-induced hair-loss, UD included gold die cut parallels at a rate of 1-per-blaster.  I know, I know, the Xponential inserts are freaking amazing.  Slow down speedy. We'll get there.
Many collectors try to complete rainbows of one player or complete a set of parallels (ie A&G Minis).  Being of the same nature, I was immediately fascinated with the idea of completing the master set of 2008 UD X.  The idea of a base+2 parallel set fitting nicely in pages intrigued me.
The base set took no time at all.  I've completed it probably 5 times over at this point.  The die cut set was a little more difficult.  At the time I started collecting it, I think I had 60-70 of the 100.  Through trades and some purchasing, I completed that set about a year after I started trying.  Then came the golds. After some concentrated effort devoid of excess dollars, I managed to get to about 30% of the set.  At 1-per-blaster and only in retail, folks weren't exactly overflowing with them.  I put the set on the back burner, just as I did with this blog, for the better part of 5 years (it's probably longer than that but when you have a kid, time becomes incalculable). 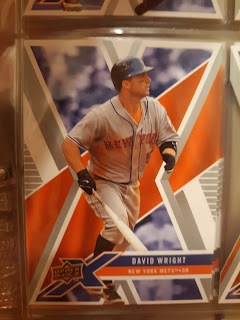 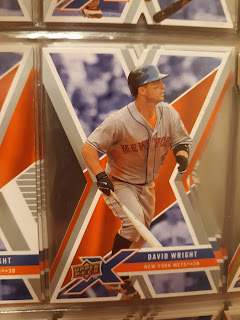 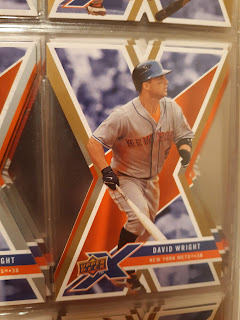 Before I knew it, along came 2020 and 2021, a flummoxing pair of years.  Suddenly I didn't have to go anywhere or do anything, so I could play with cards again.  I also wasn't spending money on eating out and other things, so the bank account was feeling antsy.  Yay, the hobby is back for me! Things are great! I can go to the store and buy retail again! (I'm not a smart man).  On a side note, is there a better first name for a last card than Lastings? 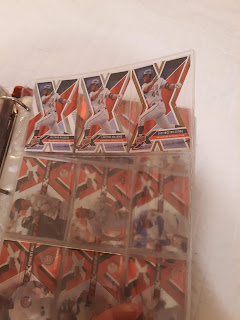 One day in early 2021, I saw a house for sale.  I thought, "that's a pretty cool house, but we can't afford to move."  Then I looked up our house.  Over the next few hours, I realized we actually could afford to move.  Before we could really think about it, we were talking with a realtor and starting to organize our house.  I needed to quell the card situation.  The cards had what you would call a little bit of a weight problem.  I came across some cards to keep, some to sell, and some to recycle (1990 dupes/trips/quadrupes/quindrupes/sexdrupes I'm talking to you!)  I ended up selling about half of my physical volume of cards.  Ok, not MY physical volume. I didn't offload unfortunate fatrolls of cards.  I cut my occupied card storage in half.  Not literally cut. Fuck, writing is hard.
I decided that I shouldn't just dump the card money into to house stuff.  I should at least treat myself a little.  The lingering pain of an unfinished set called to me.  I could use the money to bring myself to completion.  The set. The set to completion.  Potato Putahtoh.  I sped off to sportlots.com to see if I could find everything.  Between there and ebay, I found them all.  And I bought them all.  I couldn't wait to page them up and look at my new set.  But I had to wait, because even after the cards arrived, I had to spend forever pulling the little cardboard triangles out of the shittily die cut cards.  Yes I pulled them out.  I don't care if the card tears slightly.  It's my set you PSA-loving piece of anyway I then put them into the pages.  The warm feeling of success rained over me as I'm like 90% sure I'm the only person to ever intentionally complete this set.  It looks so nice in the pages. It's as close to perfection as I ever intended. 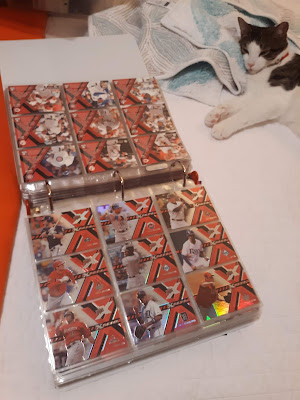 Ok we'll talk about the Xponentials now.  They're fantastic. They're shiny and embossed and everything that makes gaudy inserts great.  Of course UD made them imperfect by organizing them by sort-of-initials instead of numbers.  I say "sort-of" because UD completely crapped their pants with this one.  You see, Josh Beckett and Jason Bay are both JBs.  So in the Xponential 1 set, Bay is card #JA and Beckett is card #JB.  So naturally that should follow if they both have cards in Xponential 2, right?.  NOPE-a-roni.  Becket is X2-BE and Bay is X2-JB.  Then, Bay doesn't have an X3, but Beckett does and guess what?  It's back to X3-JB. 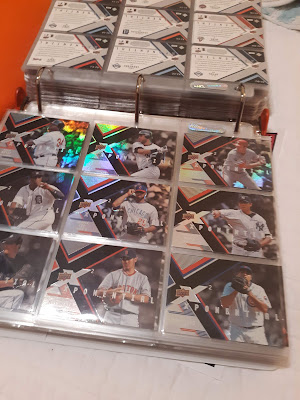 How does no one interrupt the dumbass trying to label by name and tell him just to count to 75?  "I don't know man, 75 seems like a lot of numbers and the alphabet only has 26 letters. Also I'm going to need you to wipe my ass later I had prunes with breakfast" 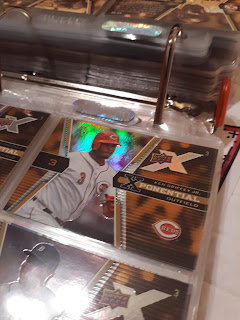 Imagine making a set as phenomenal as the Xponential 3 and not just using numbers.  Also imagine if Blogger didn't change the damn font every time I load a picture. 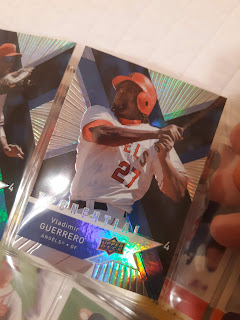 The idea that in 2021 a Vlad Guerrero was the last card I needed to complete a master set and I didn't have to shell out ungodly amounts of money is pretty amazing. Glad it was the old fart.
And thusly henceforth wherefore, I have come full O on X.  Likewise, I've come full circle on this house.  This time next week, I'll still happily own my 2008 Upper Deck X set while not owning this house.  I've downsized my card collection just in time to move to a bigger house.  The Me who bought those discounted blasters twelve years ago wouldn't understand any of this.  I'd just tell him that none of it is supposed to make sense; it's just supposed to happen.
Posted by Spankee at 4/21/2021 05:51:00 PM 3 comments: