Family, Cards, and the Longest Punt Ever Kicked

When people ask why I collect cards, my explanation is typically that I collect cards to which I have a personal collection.  I played backyard football with Michael Cuddyer at my best friend's 10th birthday party.  My mom was Justin Upton's 2nd grade teacher.  BJ Upton was in my algebra class.  I played ping-pong with David Wright at his house in high school.  I've been friends with Scott Sizemore since pre-school.  I collect former VT Hokies because my time spent at VT, especially at football games, is something that I really cherish.  The other random cards I've collected over time have some kind of connection to me.  I didn't think I could be more connected to cards.

Now, I have cards that are family. 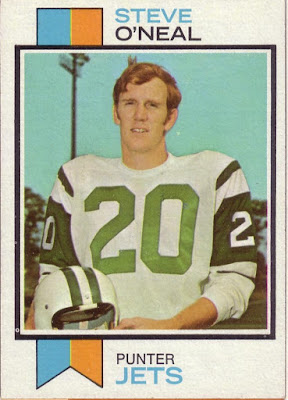 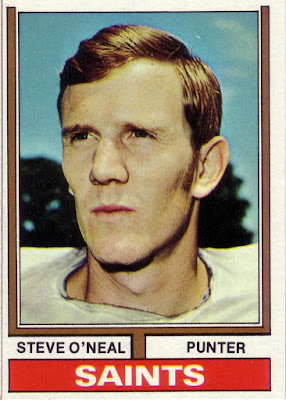 Steve O'neal is my first-cousin-once-removed-in-law-by-marriage...or something like that.  He's the husband of my wife's dad's cousin.  In other confusing words, my father-in-law's cousin is married to Steve O'neal. From Steve's perspective, I'm his wife's cousin's son-in-law.

I had the privilege of meeting Steve for the first time about a month ago when my wife's family had a gathering in the sticks of Virginia.  Steve and I had an excellent conversation for the better part of an hour before I had any clue he had played in the NFL.  When I asked what he did for a living, he said he was a dentist for 40 years.  I'm pretty terrified of the dentist, so I didn't really dive into that topic too much.  It wasn't until his wife mentioned his time in the NFL that his playing days came up.  My wife and father-in-law didn't even know he played in the NFL.  He told me a couple stories about his career, mentioning Coach Weeb Eubank and Joe Namath and the like.

I asked him if he had any football cards, and he said he had one with the Jets and one with the Saints.  Naturally, I bought them on eBay while still talking to him.  He told me he gets 2-3 letters in the mail each month with folks asking him to sign their cards.  He appreciates those who take the time to send nice notes and hates when he gets a card with only a cold request of "sign this card."  I made sure to tell him that folks really appreciate when people like him will take their time to sign a card and send it back.

He then told me about his two cards.  He said that when he got to the Jets, being a punter, he didn't have much say in what jersey he ended up with.  While Namath had a fresh jersey and cleats in his locker for every game, Steve had the same jersey for 4 years.  To make things worse, they issued him a size 56 jersey, when he requested a 48.  So, he was constantly pushing the sleeves up to keep them from covering his hands.  If that wasn't bad enough, he had no idea they were doing card pictures at practice one day, so he had to attempt a last-second helmet-hair fix.  As a result he said his hair was a little messed up.  Look at his 1973 Topps card. THE SLEEVES ARE ROLLED UP BECAUSE THEY'RE WAY TOO LONG AND HIS HAIR IS OUT OF PLACE. Mind blown.  As for the 1974 Topps card with the Saints, he said they never bothered to take a new picture. They just airbrushed the green out of an old Jets picture they already had.  Two cards of a guy I'm related to and a story to attach to both of them.

After our conversation, he went on a walk, and I went on a google.  I came across his wikipedia page.  Apparently he failed to mention to me that he kicked the longest punt ever. THE LONGEST PUNT EVER!  98 YARDS!  Seriously, go to the NFL Punting Records page.  You'll find this:

Here's an awesome article on it.  Here's video of the actual kick.

It's a record that may never be broken.  You can't kick a 100-yard punt because the ball can't be spotted in the end-zone before the kick, so the max possible is a 99-yard kick.  Of course, a 99-yard punt is possible, but would actually be a worse punt, since it would be a touchback. 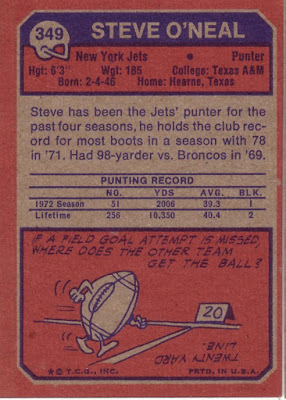 Of course the card is going to mention the 98-yarder.  It also mentions another record.  He held the Jets record for most punts in a season with 78 in 1971.  Unfortunately, that record was broken in 1976.

The back of the 1974 Topps card also mentions the 98-yarder, because why wouldn't it?  But, there is something else on the back of the '74 card that is way way WAY WAY more awesome. 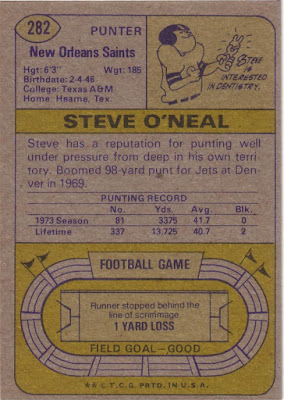 Here, let me zoom in on that upper right corner for you: 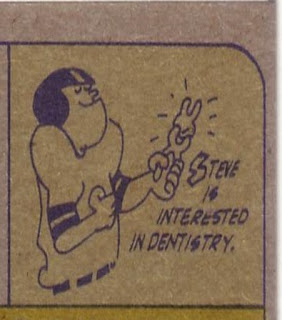 
Shortly after this card was produced, Steve completed dental school, retired from the NFL, and started the first of his 40 years as a dentist.