I must have this card... 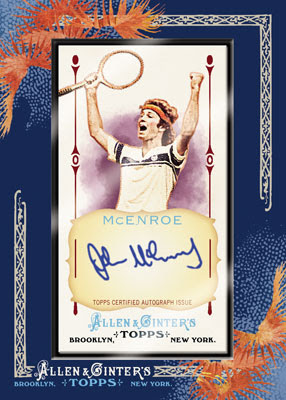 I absolutely love the blue frames.  This card would look great with my other McEnroe autograph and memorabilia. The base design is pretty awesome as well.  I need to get stuff on eBay ASAP to prep for buying a lot of A&G.
Posted by Spankee at 2/28/2011 08:54:00 PM 4 comments:

So, Thursday night, I hear the toilet flush and my wife start to scream.  I run upstairs to find the toilet overflowing, which is just so wonderful.  Apparently, the previous owner didn't seal the floor too well, because after cleaning that up, I came downstairs to find a huge puddle in front of the refrigerator and water dripping from the air vent in the ceiling.

Certainly the weekend will get better, seeing as how we were heading to her Grandmother's house for her birthday.  Or not.  While on the interstate going roughly 70 mph, the driver's side rear tire on my truck blewout.  Luckily, we avoided anything major and were able to come to a stop.  Unfortunately, the blowout beat the hell out of my baby, so any tax refund we may see will be going into body work on the truck.  Check out the picture of the tire below...I'm feeling pretty lucky to be alive.  I'm perfectly capable of changing a tire, but things are a little different when I am four feet of the interstate and the other cars are blowing by at 70+, so I called AAA to come out and change the tire.  We finally made our way to her Grandmother's before too late, and that was great.

When we got home, I decided to take a shower, and wouldn't you know it...no hot water.  After being unable to light the pilot, I decided to lookup the gas company phone number on the web.  I fire up the home computer and guess what...43928592 pop-ups and a nasty virus.  After an hour or two of fighting it, I had the computer clean.  I then found the phone number, but it was too late to call on a Saturday.

So, that's where we stand right now.  Tomorrow will be filled with getting the hot water heater fixed and getting a body work estimate for the truck.  Needless to say, I haven't done a lot of carding.  Hopefully I'll get back in the game later this week, once things stop sucking. 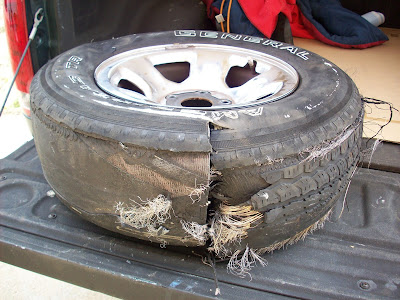 I just posted the fifth round a little while ago, so let's go ahead and throw out round 6 as well.

#10 2008 Stadium Club 2 Packs (Rhubarb Runner):
Pack 1:
23 Tom Glavine
142 Greg Smith RC
74 Rich Harden
38 Hunter Pence
51 Ichiro First Day Issue
Pack 2:
52 Vernon Wells
88 Hideki Matsui
14 Prince Fielder
131 Sean Rodriguez RC
150 Gregorio Petit RC First Day Issue
>>> The first pack yielded a great Ichiro, which was about as good as it got.  The photography on these cards is great though.  I mean, the second pack had a diving catch (with ball in flight), a bunt, a baserunner, a nice closeup of a Prince's batting stance, and a dude turning a DP.  That's just great variety right there. 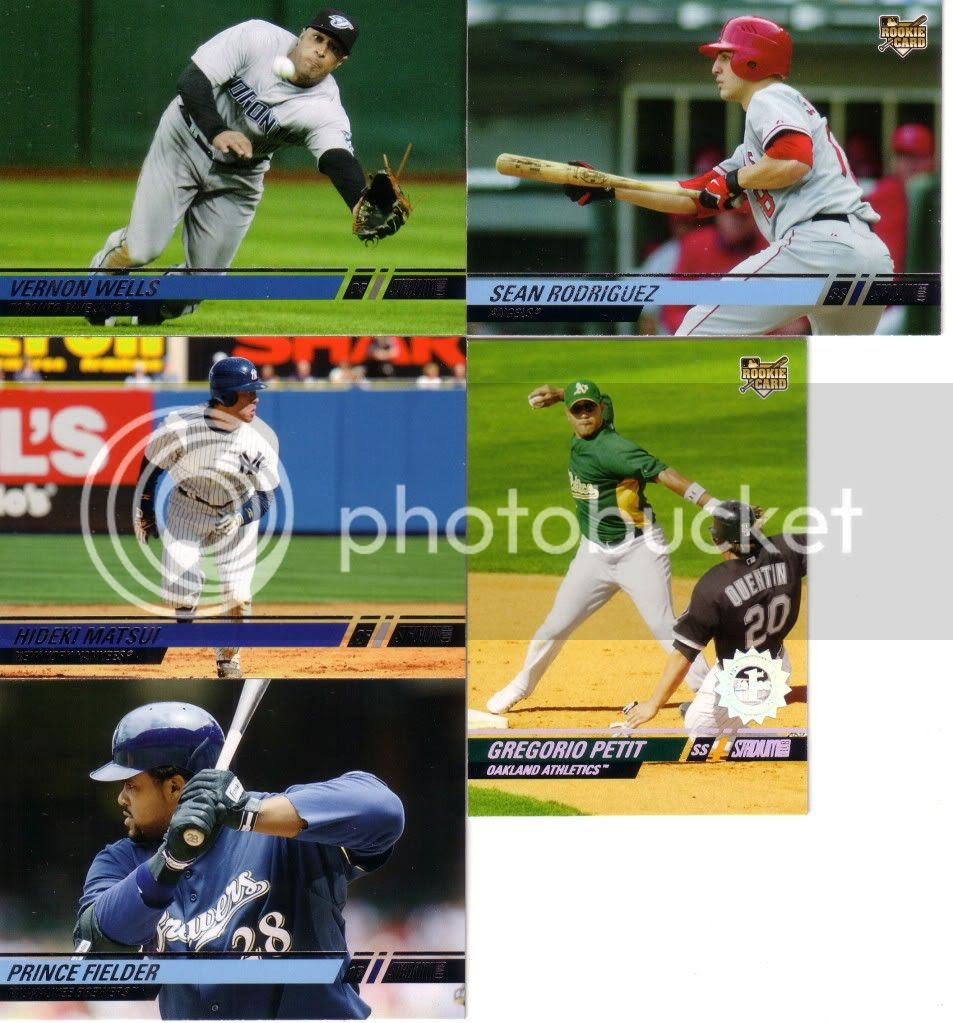 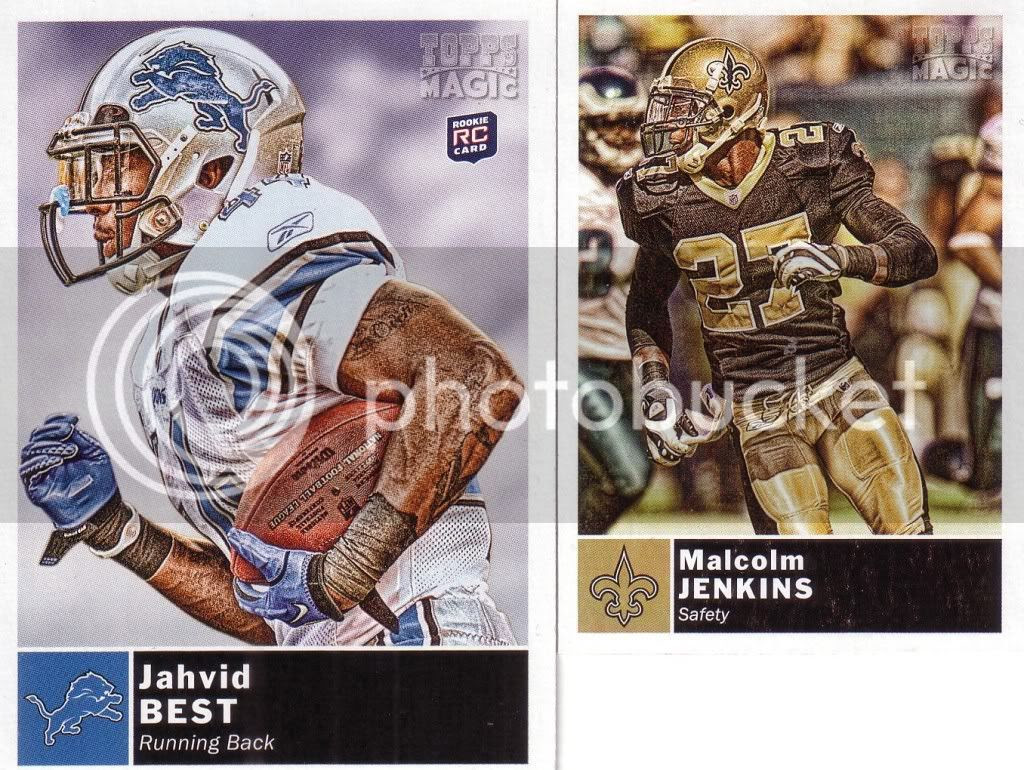 Ok, so we're halfway through the first round, and the matchups have been fairly interesting.  Since we're halfway, how about another addition to the prize pool.  The winner, in addition to the Best of Chrome Refractor set, Wild Card Packs, and the BallBusters Trivia game, will also receive this book: 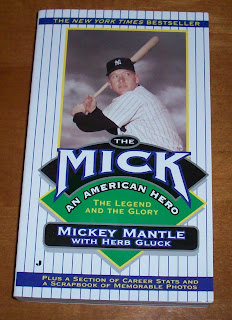 Don't worry, I don't really read much, so it isn't a hand-me-down; it's brand new.

Let's get to the group 5 matchup:

#2 2009 Goodwin Champions Pack (TJ):
Gerry Lopez (Surfer),
Joey Votto,
Cal Ripken,
Aaron Cook Mini
>>> A pretty run of the mill pack, but who doesn't love a Ripken.  I'm not a big fan of the camo Reds jerseys, but I get the idea. 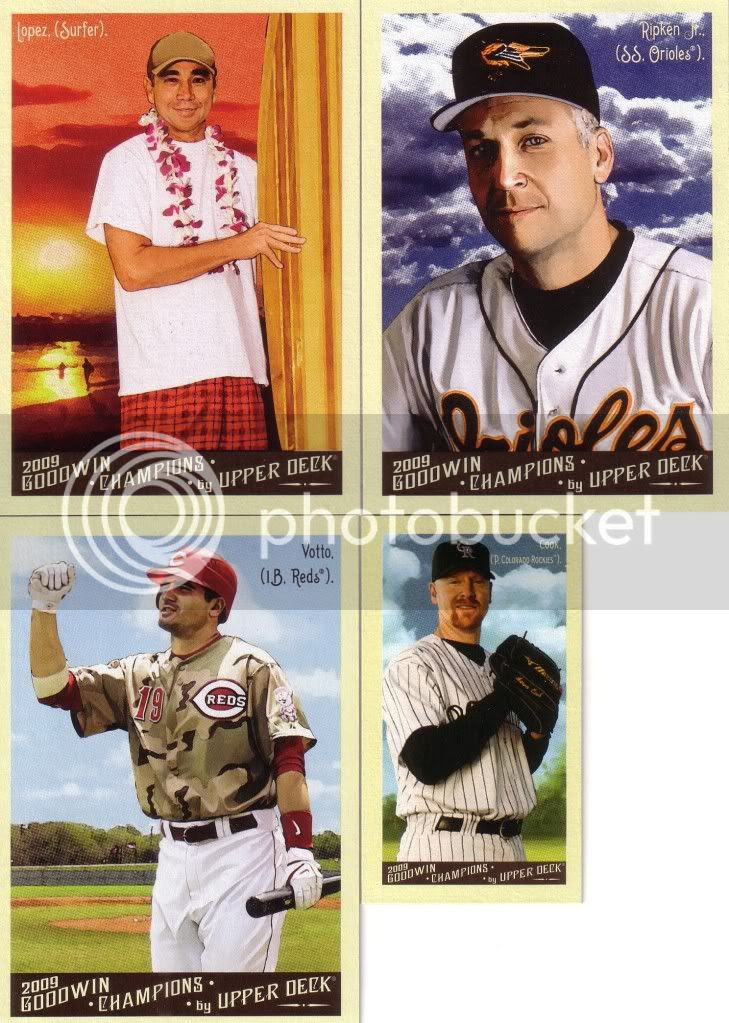 Wild Card 7: 2008 Topps Allen and Ginter Pack (Mark the green card):
Lance Berkman,
Miguel Cabrera,
Pat Neshek SP,
Luis Gonzalez Mini Ad Back,
Ken Griffey Jr. States Pennsylvania,
Checklist,
Pablo Picasso,
Chone Figgins.
>>> A Griffey insert, an SP, and an ad back mini make for a nice pack.  I love the Picasso card.  You probably know about Picasso's art skills, but you should really check out some of his quotes.  My favorite: "When I was a child my mother said to me, 'If you become a soldier, you'll be a general. If you become a monk, you'll be the pope.' Instead I became a painter and wound up as Picasso." 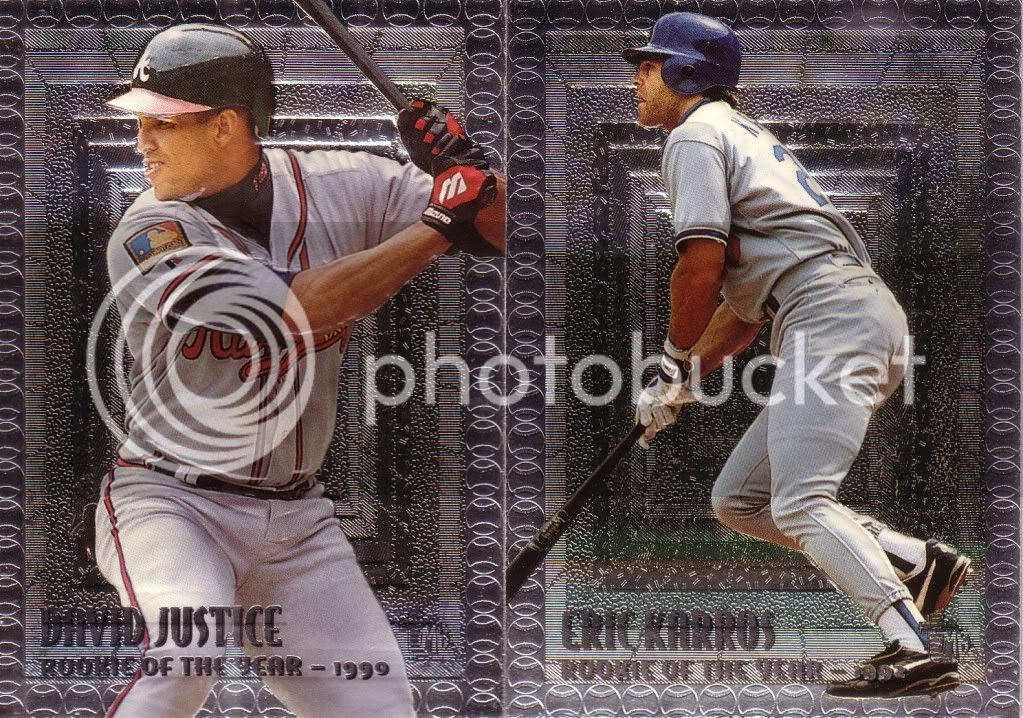 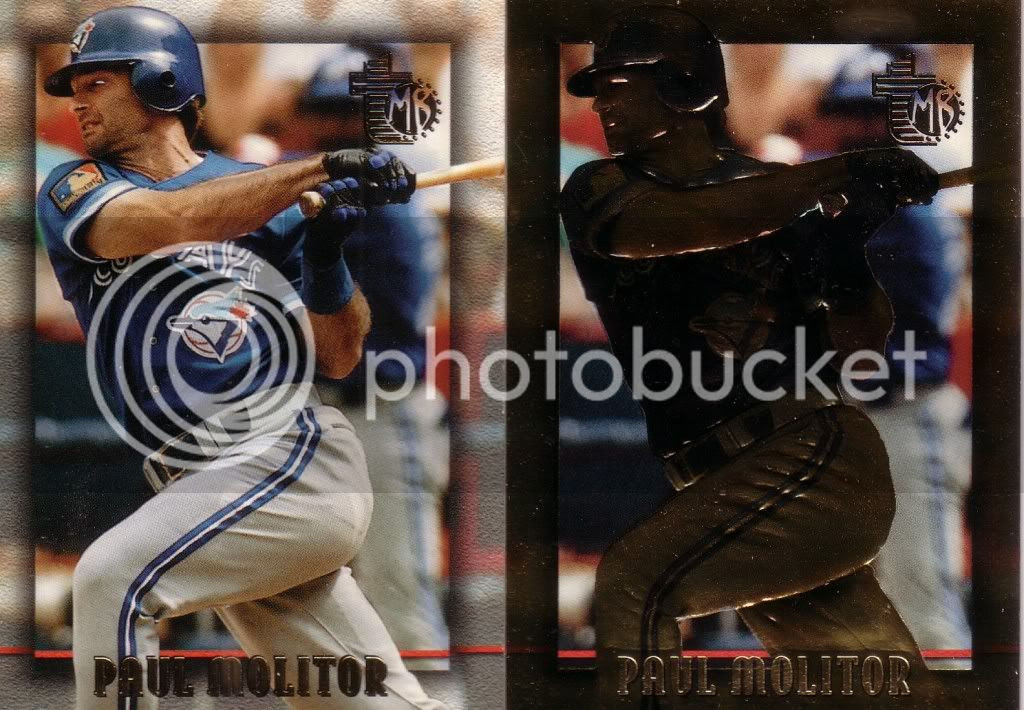 This should be an interesting matchup.  A couple retro styled cards, some great '90s cards, and some ugly football cards should offer some insight into what you all like.

Yet another trade post that I should have gotetn up a long time ago.  This time, it's from Chris over at Nachos Grande.  I had come across a Barry Larkin he was interested in, and I had some of his set needs, so we struck up a deal.  He posted his side here.  He hooked me up with a number of cards from my want lists.  I find that I end up getting most of the inserts of the players I collect, but very few of the base cards; I guess most people assume I already have the more common stuff.  He sent some of the base cards I'd missed out on, namely the 2010 Topps and 2010 A&G Sizemore Rookies. 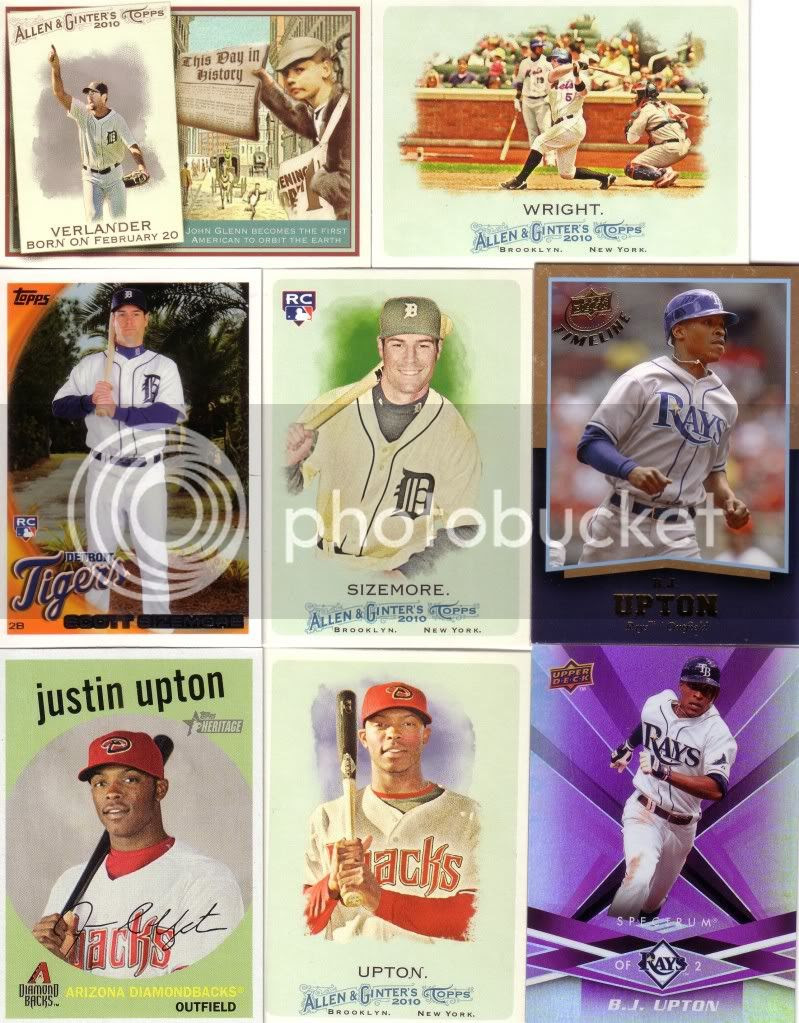 No trade is complete without minis: 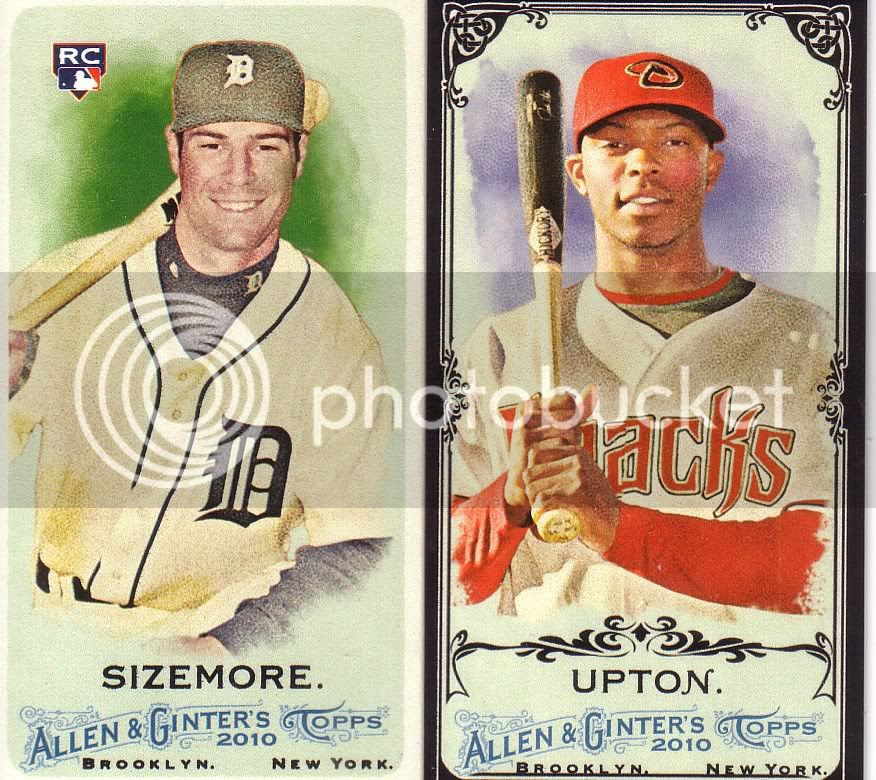 I now have the base, mini, ad back mini, and Bazooka mini of the Sizemore.  Anyone have the black border?

Catching up on trade posts: Dimwit and Rhubarb

Sam of The Daily Dimwit, David of e rayhahn rayhahn, and I of...uh...here, recently worked out a little threeway trade.  This isn't the kind of threeway I would prefer to brag about on here, but I netted some great cards nonetheless.  Of course, I am way behind in posting this as Sam and David have both posted about it long ago.

I received a buttload of 2009 Allen and Ginter from both of them, and Sam also sent a ton of 2007 UD Masterpieces.  In addition, David sent me some great PC additions featuring Verlander and Cuddyer:

and Sam sent me these beauties: 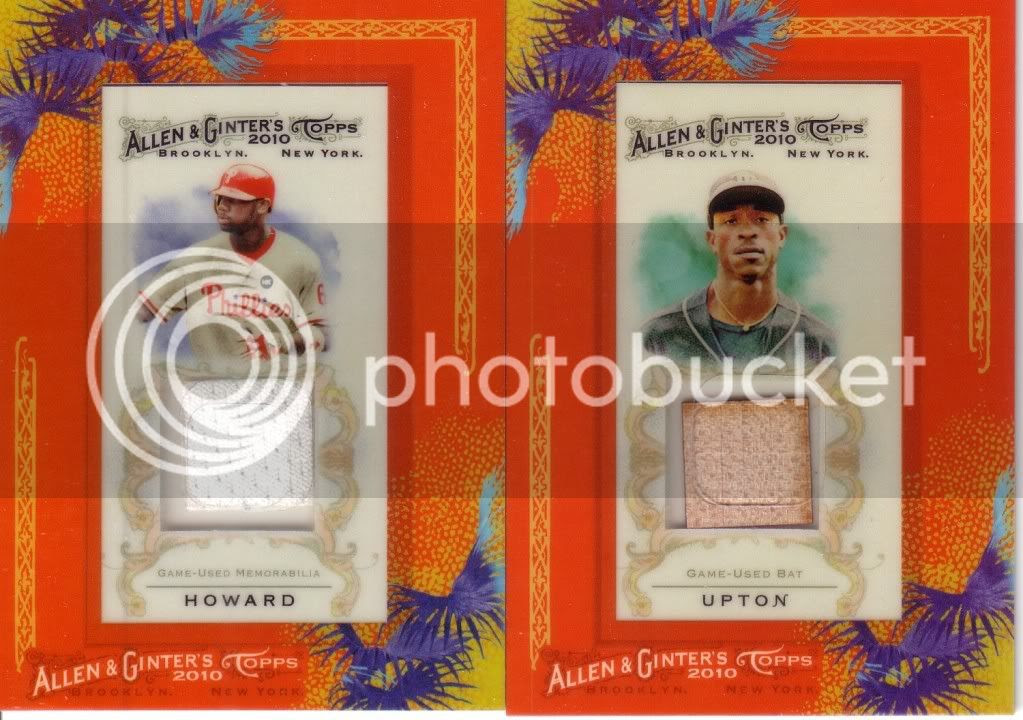 The Upton goes in my PC, while the Howard is up for trade.

On to group 4 in the first round: 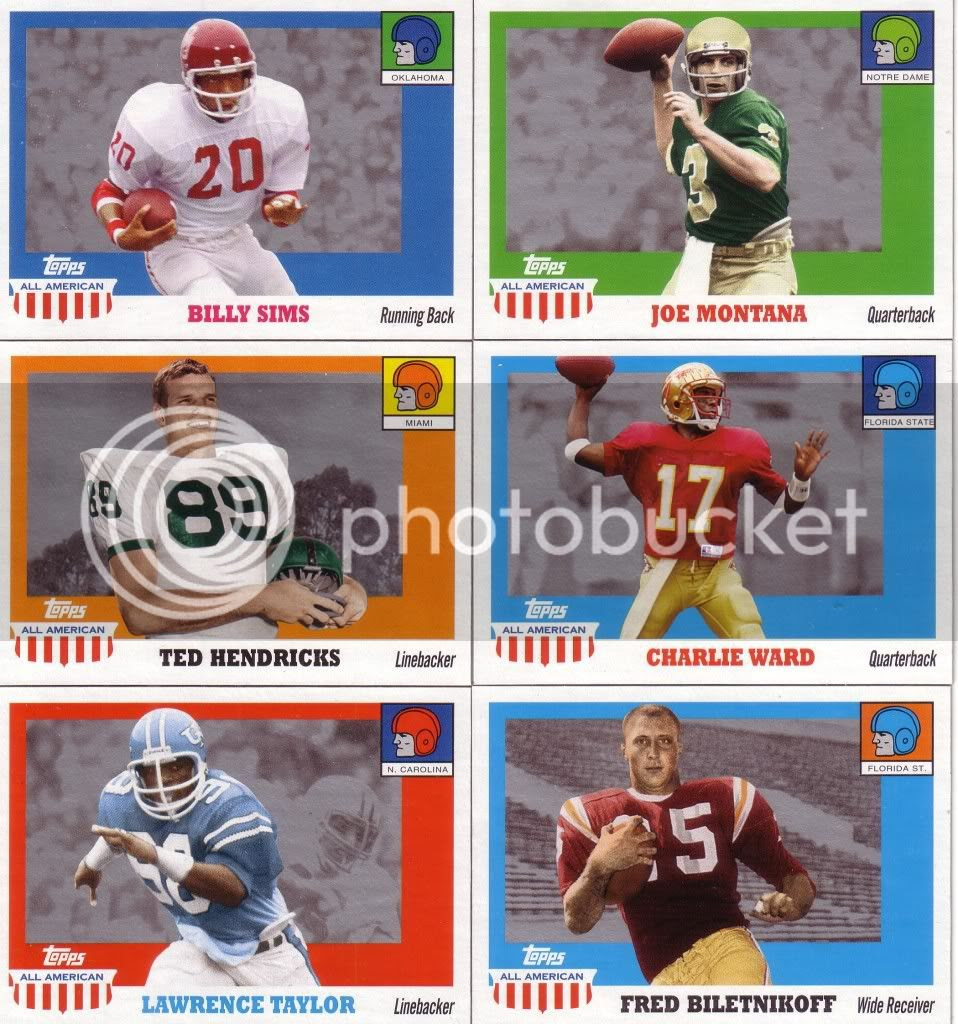 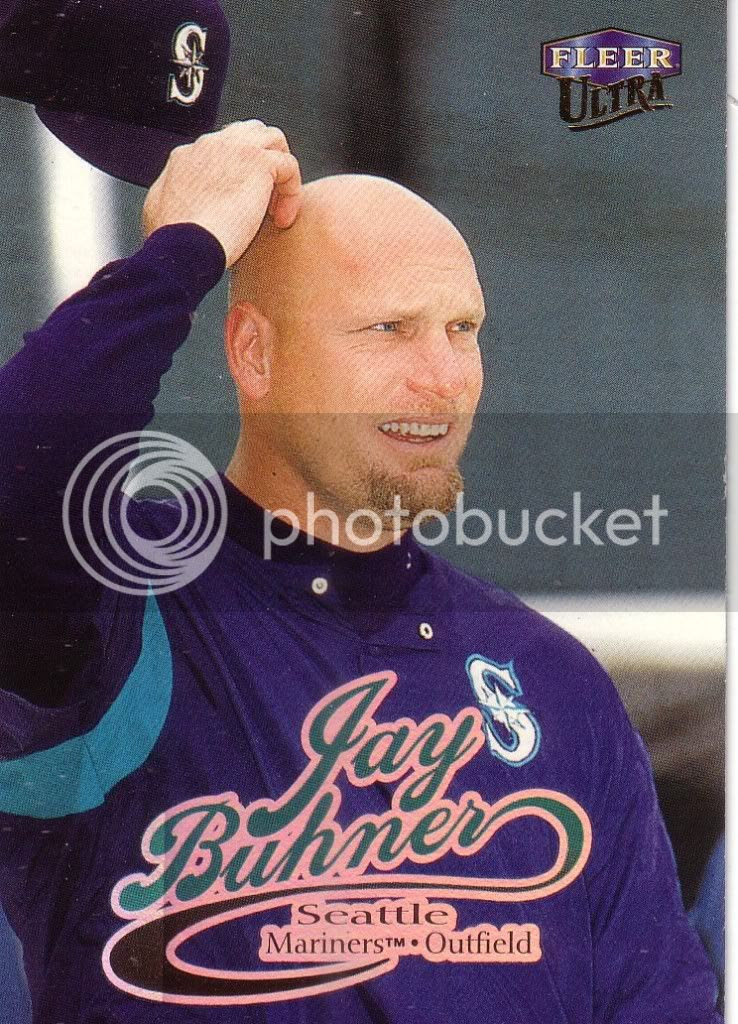 Voting is up on the sidebar.  Again, most cards are available for trade, with the exception of the WildCard pack, so drop me a line if you are interested in anything.
Posted by Spankee at 2/18/2011 01:20:00 PM 2 comments:

Voting on the first two groups led to an upset of the top seed as 2009 Bowman Draft knocked off 2010 Bowman Platinum Value Pack.  The second group was not even close as 2008 Upper Deck X stormed to victory.  I've been out of town on business, celebrated my first wedding anniversary, and been sick as a dog this week, so I haven't had a chance to do much of anyhting card-related, lately.

Let's get back to the contest. 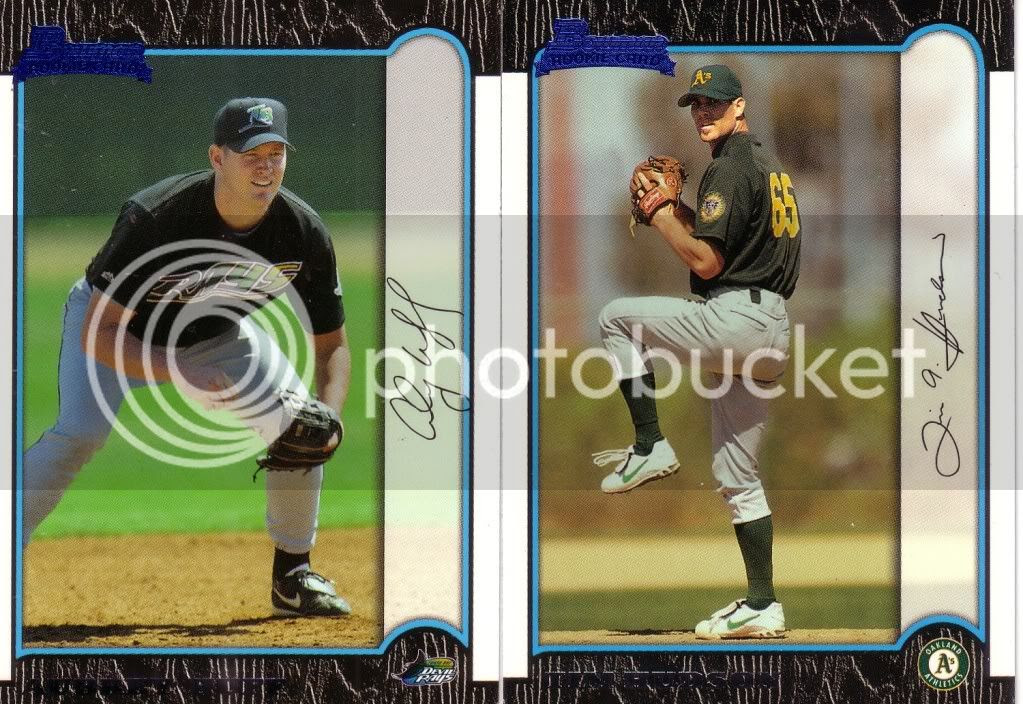 Ok, so voting has been great on the first group with two packs neck and neck.  Here is group 2: 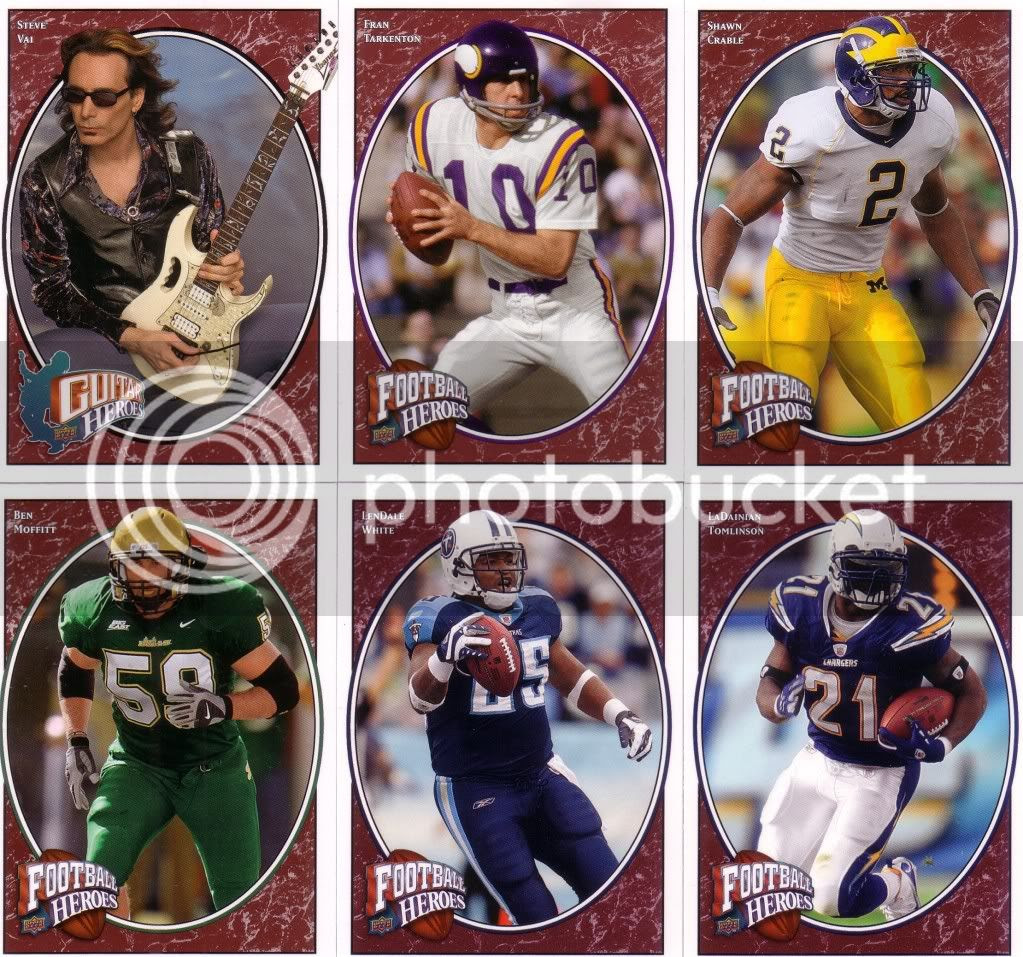 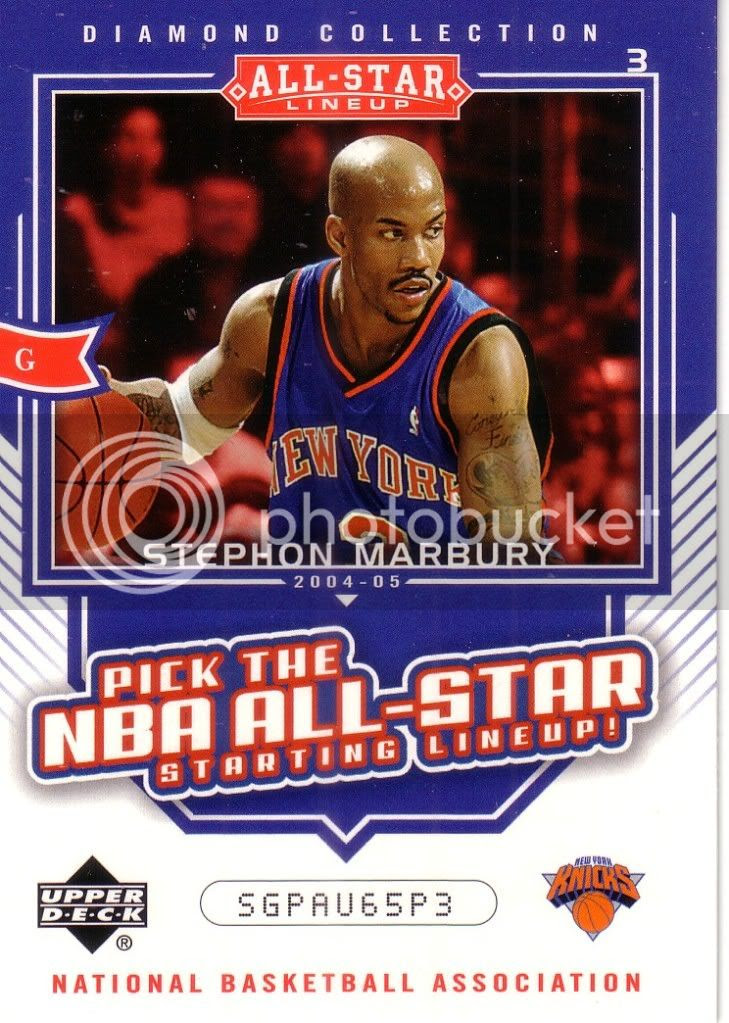 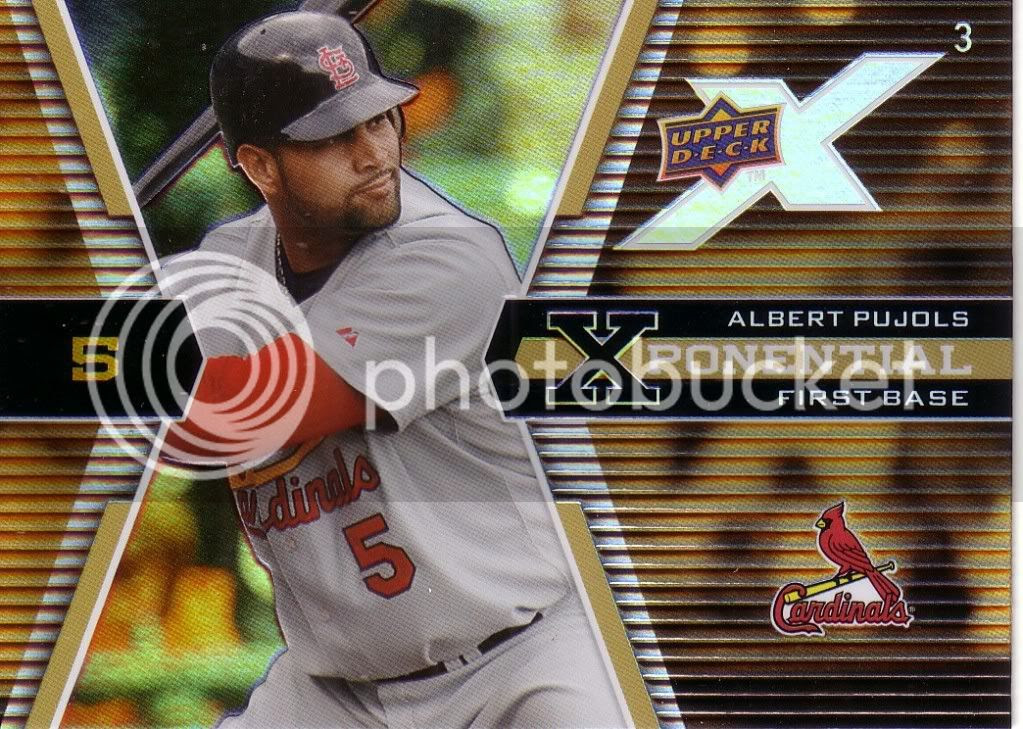 I'm down in Huntsville, AL for work, so naturally I sought out a card shop.  The only card shops where I live are comic book stores that minor in cards, so it was refreshing to go to a REAL card shop, Champs Cards.  If you're ever near Huntsville, go there.  The shop just recently produced a Plates and Patches Bradford NFL Logo Patch Auto 1/1 and earlier today, which is nothing compared to the Gehrig cut auto that was just pulled there.  The owner had a ton of boxes to sift through, which I did for about an hour since I had nowhere else to be.  The end result was a great stack of cards for my PC. 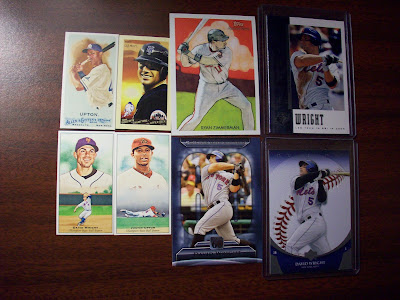 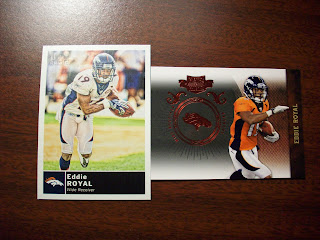 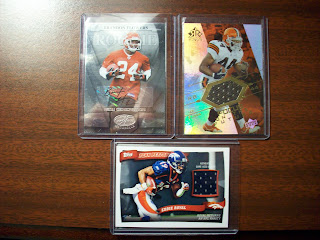 So, I picked up some great cards for my PC, including a pack pulled Verlander.

Contest Bracket Round 1 is underway

Alright, I announced who had what Wild Card Packs, so let's get on with the first round.  I'll do this in groups of 4.  The bracket can be seen on the Contest Page. Here is the first group, voting will be on the sidebar, and will be open for three days.  Most cards are available for trade (some have already been traded and the WildCard packs are part of the prize).

May the best pack win. 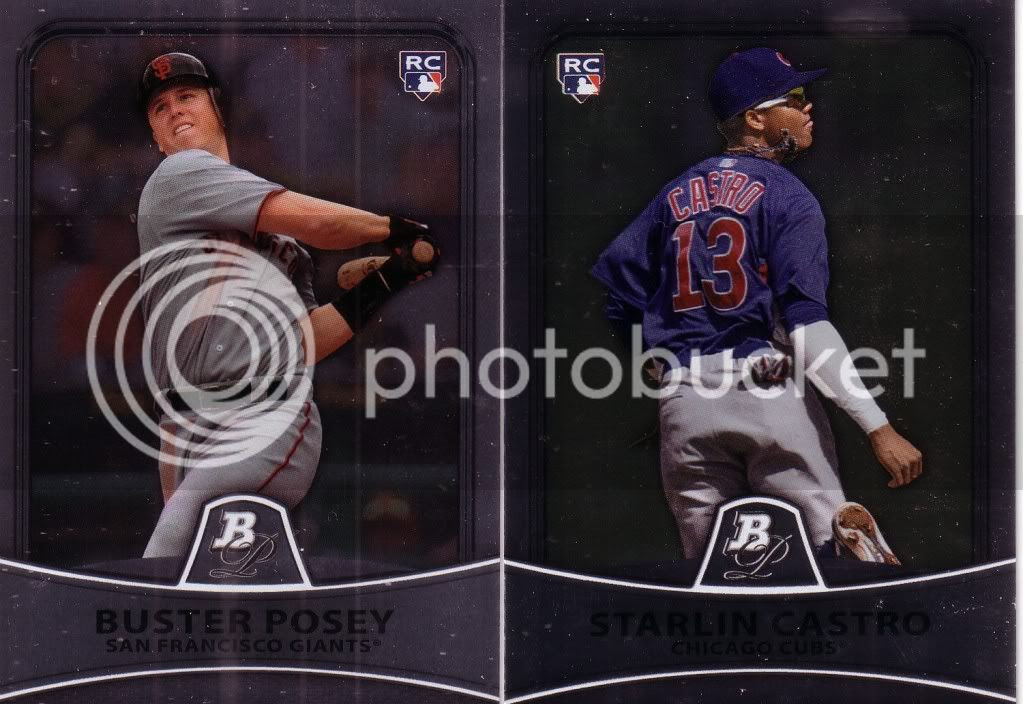 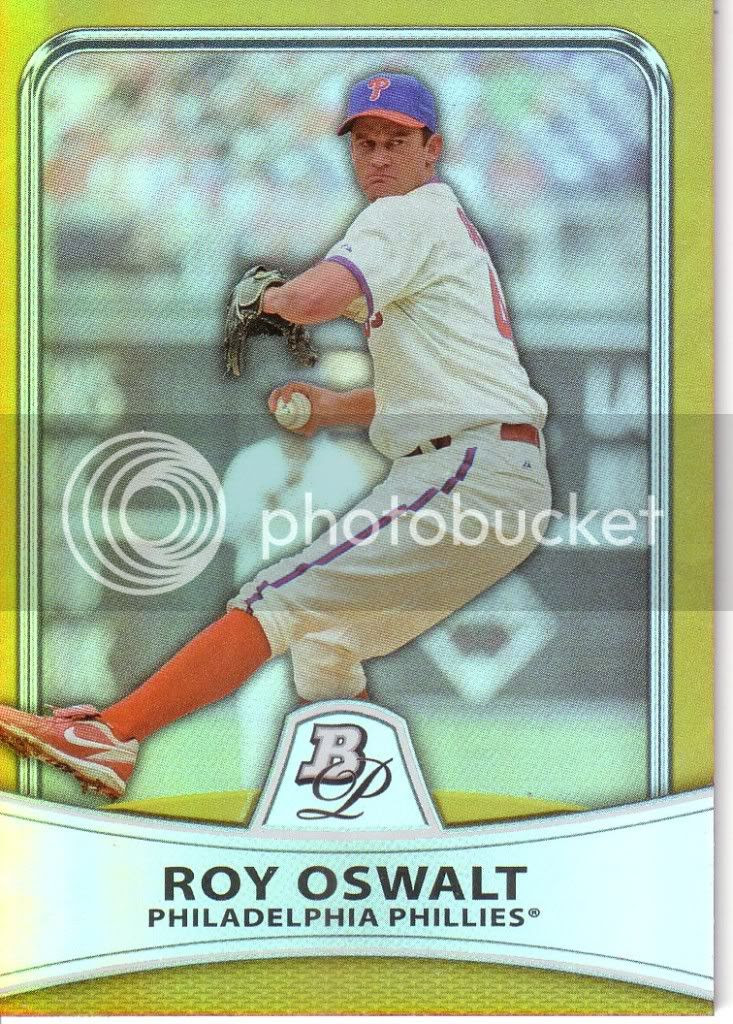 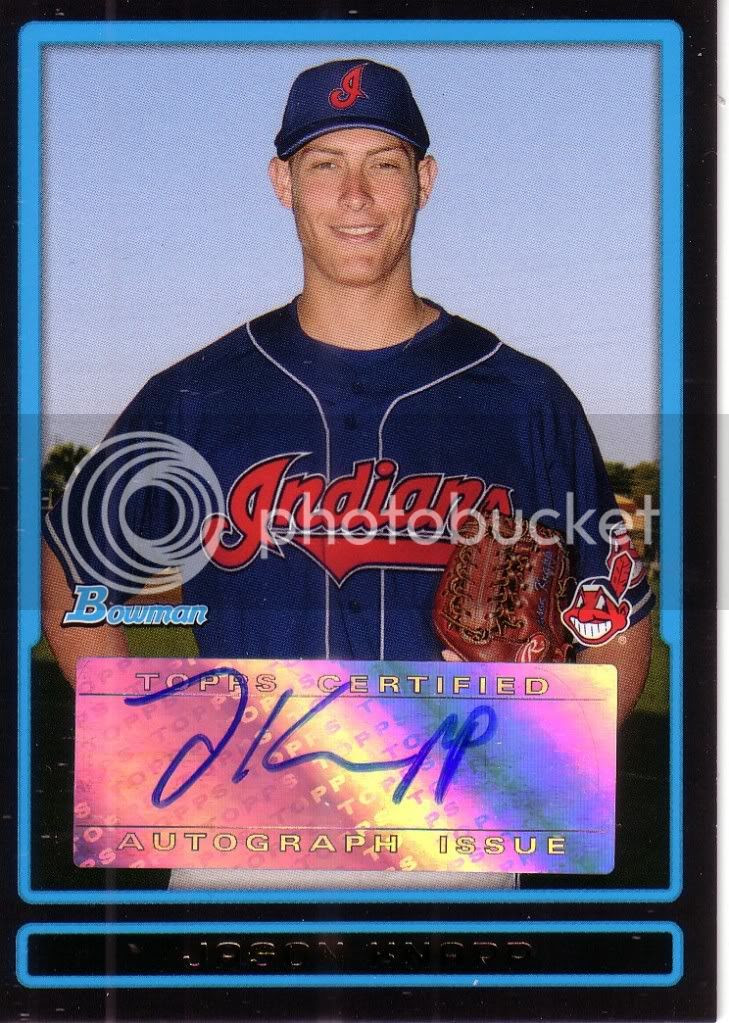 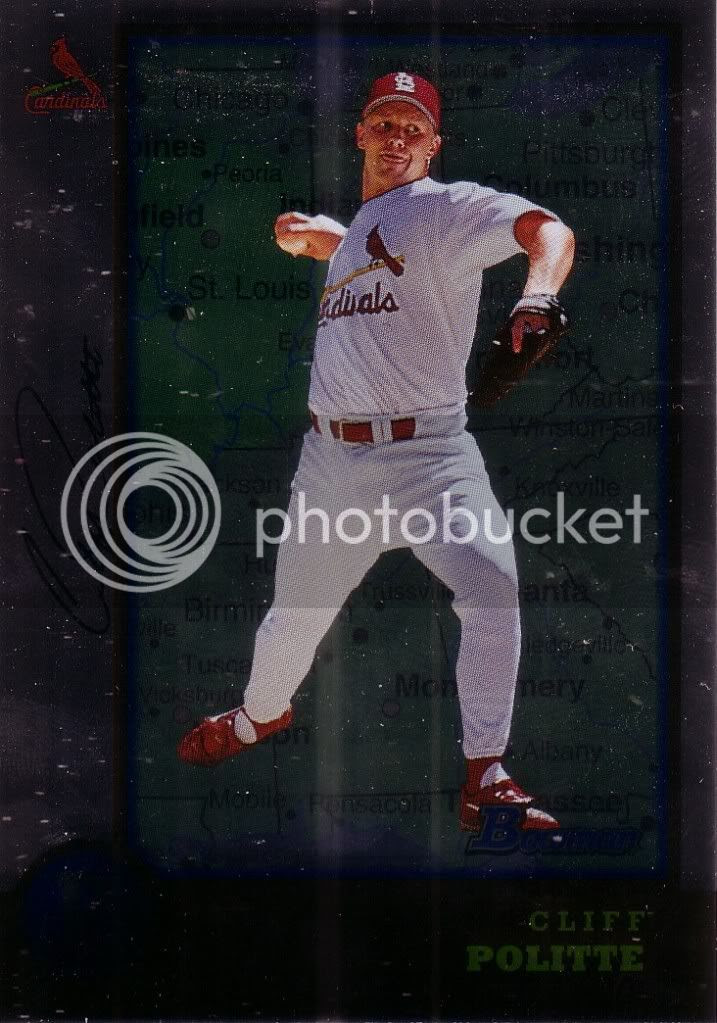 Wild Card #8 (Ryan "O" No): 2002 Bowman Football Pack
Larry Ned RC
Robert Royal RC
Nick Griesen RC
Ricky Williams RC
Nick Griesen Silver #040/250
Checklist
Jabar Gaffney RC
Andre Davis RC*
TJ Duckett RC
Daniel Graham RC
Jon McGraw RC
>>>Well, some cool notable RCs in there: Gaffney, Davis, Duckett (sorry that's not that Ricky Williams).  These cards are part of the prize package.  The * means the Davis is going in my PC as he is a former Hokie.  If I remember, I'll replace it with a card for the winner's PC. A solid pack. The best card is easily the Griesen Silver.  Griesen is in the UFL, so it's not a huge hit, but something like 1:13 packs or so isn't bad. If you haven't seen the silvers from this set, find one.  They are textured and just plain look awesome.

Well, get to voting.  Good luck to everyone!

My wife is out of town this week, so I had some free time to work on something I've wanted to do for a while.  I wanted to try my hand at making a card.  I've designed customs and posted them on here before, but I've never actually made a card.  This one was quickly thrown together, but despite some of the obvious flaws, I'm pretty damn happy.  The problem now, is that I don't know what to do with it.

Yes, cheesy, I know, but I had to give it a go.  The scans probably make it look better than it does in person, but I say it's not bad considering I didn't have a clue what I was doing.  I thought about adding it to the prize pool of the draft contest I'm currently having. My biased self thinks it's too awesome for that, though, and deserves better. I'd consider trading or selling (yeah right). What do you think I should do with it?
Posted by Spankee at 2/03/2011 09:50:00 PM 7 comments:

Ok, so here are the wildcard packs in no particular order.  Again, these will be given to the winner as part of the prize package (less anything on my want list). 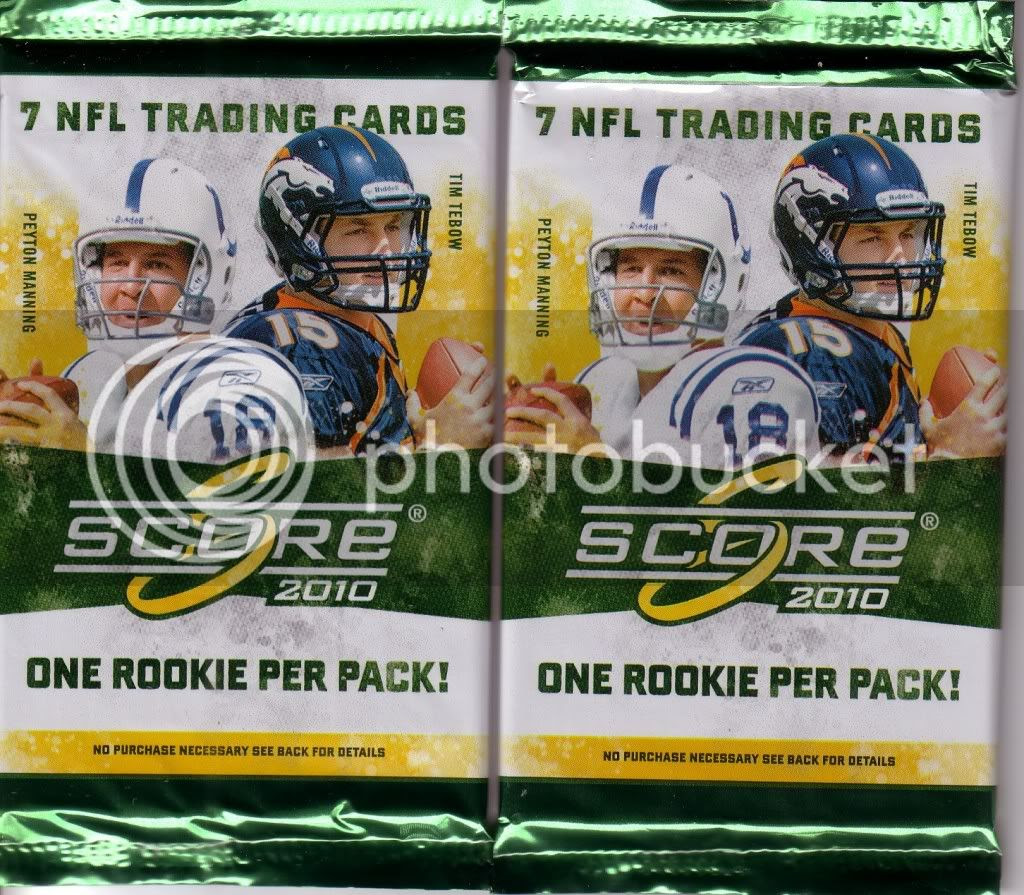 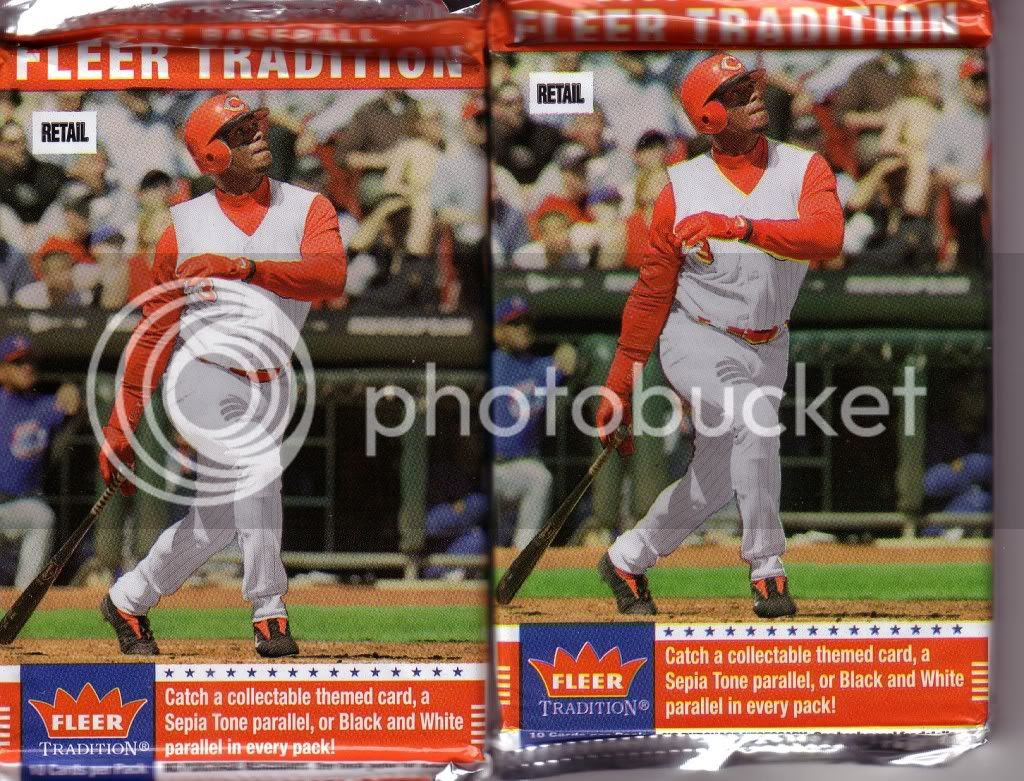 So, lets randomize these into the WildCard spots: 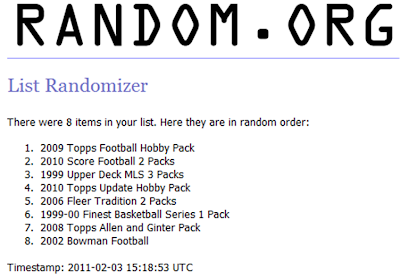 Here are the pairings for those that selected WildCards:

Now that everything has been drafted, the first round should start soon.

In the mean time, here is an addition to the prize package that already includes all the wildcard packs and the 5 card refractor set from the Best of Chrome box: 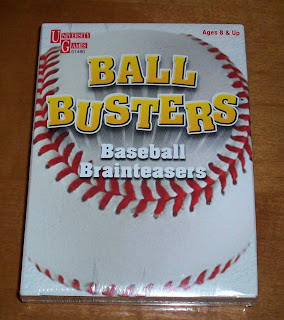