Last week was all Magic.  This week can only be described as Certified Prime Elite.  These packs put us at just over 1,000 cards so far this season.

In case you're wondering what the base cards look like, Stephen Jackson has something to show you:

It's pretty cool to get a base card of each product of one guy.  I really like how he's got the same jersey color, but different pants on each card.  The Elite and Certified cards are foil, so they scan terribly.

Prime had the only parallels of all of the packs:

Let's get to the games:

ATLANTA FALCONS 3, NEW ORLEANS SAINTS 2
>>> 3 base is better than 2 base. Strangely, the Falcons' last win was in Week 10, when they beat the Saints 3-2 in an all-base card affair.

JACKSONVILLE JAGUARS 3, BUFFALO BILLS 3
>>> I gave this tiebreaker to the Jaguars because one of their base cards was a Certified base card...and I spent more money on those.

SEATTLE SEAHAWKS 4, CHICAGO BEARS 2
>>> Both teams had 2 cards, but the Seahawks' were RCs. The Seahawks have now won 4 straight after a 1-7 start to the season.

INDIANAPOLIS COLTS 13, DETROIT LIONS 2
>>> The Colts won the base card battle, but decided to pile on with a Rookie Materials card #/299:

GREEN BAY PACKERS 7, MINNESOTA VIKINGS 3
>>> The Packers were led to this win by the New Generation:

CAROLINA PANTHERS 1, KANSAS CITY CHIEFS 0
>>> The Chiefs have now lost 4 in a row.

MIAMI DOLPHINS 8, NEW ENGLAND PATRIOTS 4
>>> The Dolphins doubled up the Pats with the help of the Gold Odrick RC up top, despite the attempts of this nice Gronk:

NEW YORK JETS 4, ARIZONA CARDINALS 1
>>> The Jets get the big win after dropping 8 of their last 9.

ST. LOUIS RAMS 6, SAN FRANCISCO 49ERS 0
>>> The Rams become the first team to hit 10 wins on the season as Stephen Jackson runs all over the Niners.

TENNESSEE TITANS 2, HOUSTON TEXANS 2
>>> I deliberated on this tie for quite a while before awarding it to the Titans, as their RC is just plain better looking:

TAMPA BAY BUCCANEERS 2, DENVER BRONCOS 1
>>> After winning 6 straight, the Broncos put up a stinker against the Bucs. Apparently clinching the AFC West led to too much celebration and not enough preparation.

SAN DIEGO CHARGERS 3, CINCINNATI BENGALS 1
>>> The Gold Gates was all the Chargers needed in this one.  The Chargers need to turn this win into a streak to have a chance at a Wild Card since the Broncos have run away with the AFC West.

NEW YORK GIANTS 20, WASHINGTON REDSKINS 0
>>> I guarantee CardboardHogs cringed when he got to the last game of the week only to see this ugly score.  The Skins didn't even bother to put up a single card.  A single card, however, is exactly what the Giants got...and it's a doozy:

Let's take a look at the standings: 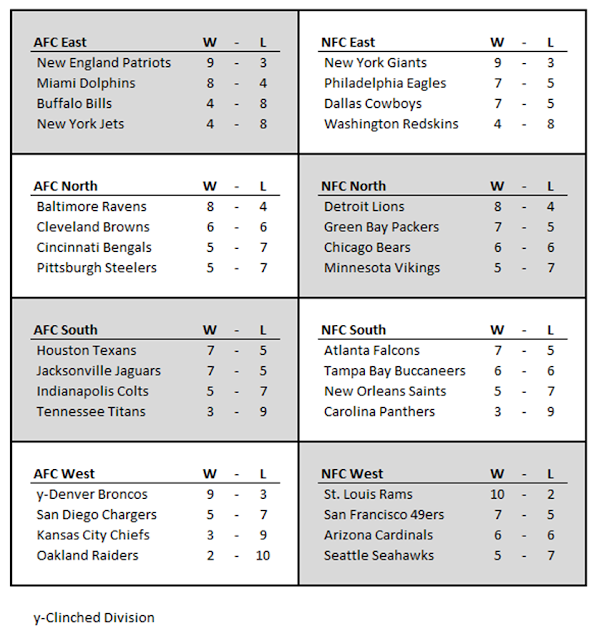 Email ThisBlogThis!Share to TwitterShare to FacebookShare to Pinterest
Labels: 2013FootballContest

A 1-0 loss to drop to 3-9. I'm starting to think my Chiefs might miss the playoffs

I hate the Eagles even more now.

...a redemption of a Giant does me in. There might have been a penalty kick if it wasn't for that card...pretty nice pull for you though.

when i buy retail, i never pull Redskins either but just chalked it up to being in the NW or something. I guess there aren't a whole lot of Redskin cards to pull in any part of the country!